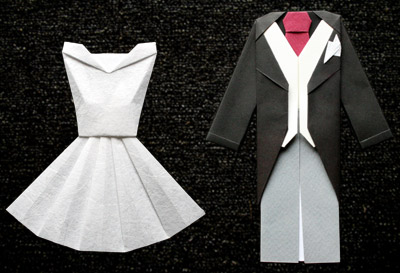 In the UK, a traditional second wedding anniversary gift is made of paper. Curiously enough, it ‘s a first anniversary in America. So, from time to time, I receive requests for origami from romantic relatively-newly-weds.

One such came recently – the husband sent me photos from their wedding and wanted paper versions creating. Purity wasn’t an issue, so I tried to combine elegant folding with a multi-piece approach, using different coloured papers to match the couple’s wedding garb. Much of it could have been folded from fewer sheets, but would have made for thick figures, which wouldn’t have looked as elegant.

The client requested them to be delivered firmly sandwiched between thick cardboard, for him to place in a suitable frame. We were both pleased with the results. Ideally, I would have gone for a slightly bustier dress (down boy!) but since it was to be framed, decided against.