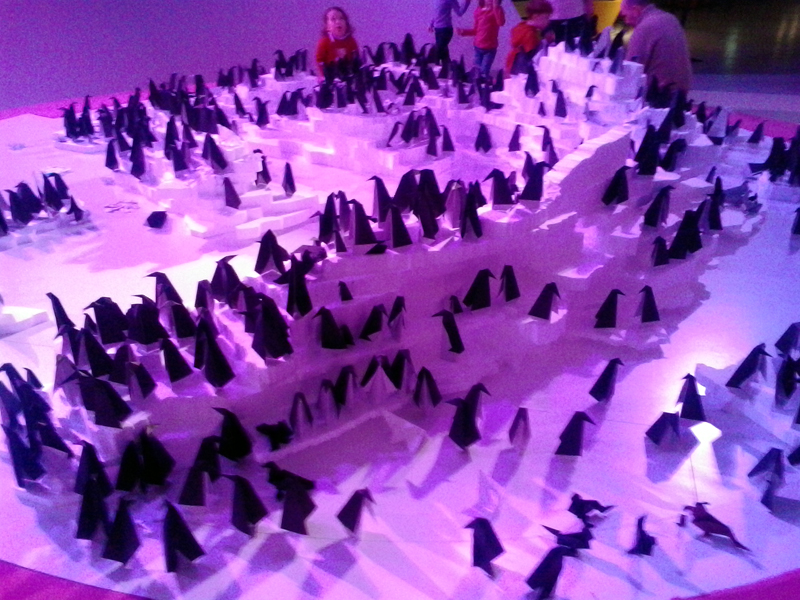 I had a superb weekend in Germany at the Phaeno Science Centre in Wolfsburg. The idea we came up with was to have visitors fold as many penguins as they could, to form a display on some polystyrene ice floes. Meanwhile, I made a near life-size polar bear, aided by my assistant, the lovely Nora. We had some paper left over, so I created a baby bear, then a sea lion to keep it company.

Having made large models before, I remembered to bring my knee pads – you can’t imagine how painful it is on the knees after a very short time! The fold took around 3 hours, with plenty of breaks for hot chocolate.

Origami Deutschland, in the form of Heiko Ahrens, helped run folding classes at tables around the exhibit, which had a giant folding polyhedron (I have a toy version of this) that expanded and contracted above it.

The Phaeno is an extraordinary building, made from vast slabs of concrete at strange angles, built next to the Volkswagen factory. It contains a huge number of science displays, presenting some fascinating scientific phenomena such as shadows, echo, inertia, robots, geometry, stroboscopics, illusions, fire tornados and much much more. I’ve certainly never seen a place like it and the thousands of visitors were clearly fascinated. There was even an origami section!

My visit was organised by the brilliant Dominic Essings, who ensured everything went smoothly and didn’t falter when I asked for all kinds of tools to help create a stand for the bear. Most of the time was spent in the centre, due to the minus 5 degree temperature, but I did find time to check out the local weissbier. The late night flight was delayed by nearly 80 minutes, meaning I arrived back home as 2.40am, but it was an amazing weekend, one I will remember for a long time.