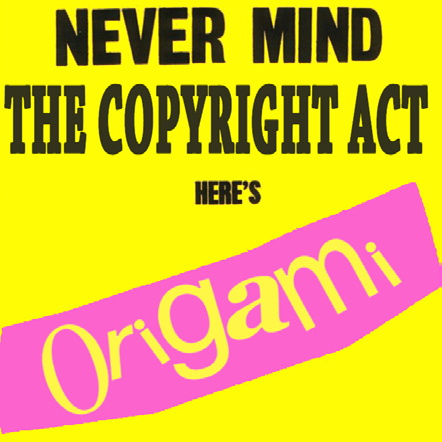 Browsing through Saj Kahn’s origami forum I’ve noticed a growing trend that I think of as “origami anarchists”. The basic tenet seems to be that all origami should be free and that creators don’t have the right to place any restrictions on how their work is used. This attitude causes a lot of grief to designers – Joseph Wu, as just one example, has only to post a photo of a new design and there are floods of messages “Great work! Where are the diagrams?”. A natural enough request, to be sure. Joseph is generally polite enough to explain that a) he doesn’t have time to diagram all his creations and b) that even if he did make diagrams, there is no reason why he should make them available on the web.

Most people understand and although disappointed, accept the situation. However, a vociferous minority argue the point, asking him what right he has to restrict use of his work. They justify their argument by stating that origamists have always shared their work, implicit in which is that origami fails to qualify for standard copyright practises. Sharing of origami is indeed a key reason why our art is so popular and the majority of designers are wonderfully free with their work. However, they still have a right to control how their work is propagated and shared. Yoshizawa was noted for the tight hold he kept on his work. Having permission to include a Yoshizawa design in your book was a rare privilege, nobody told him what he could do with his work!

It was common practice in the 60s and 70s to produce a book made of models from other books. Certainly, many people thought origami was public-domain or traditional. The problem continues to this very day. although to a lesser extent because most (sadly not all) books are written from within the origami community and are highly respectful of each other’s work. In Germany, Irmgard Kneissler and Zulal Ayture-Scheele borrowed freely and without credit. I did meet the latter once, but she was very glamorous and I (cough) failed to discuss the relevant moral issues with her. It may be that this common misconception about origami copyright, allied to the sharing ethic sowed the seeds for the idea that it’s “all up for grabs”.

Like everyone else, I’m frustrated when I can’t get to fold a great model I’ve seen, or when someone told me I couldn’t use a model in the BOmag because they were “saving it for a book”. However, artists of any kind call the shots. It’s their work and they don’t have to share it!