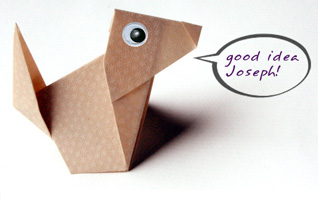 I recently posted a photo of my latest creation (a dog) on Facebook. Joseph Wu suggested it might be improved by the addition of “googly eyes”, so that’s what I’ve done (OK, via photoshop).

Clearly (?) a joke, it nevertheless opens up the old debate about the merits of decorating origami. Most dedicated folders don’t like it, but I’m becoming increasingly attracted to it, certainly since I’ve started working with children. However, sticking on “googly eyes” is a step too far, although next week, I may be advocating it. What do you think?