In February 2002, I was fortunate enough to be invited as a special guest to the second Swiss origami convention at Berne. It’s always delightful when your efforts at creating provide such wonderful results as a trip abroad. I’ve been lucky enough to gop to three overseas conventions as a guest, which I would otherwise have been unable to afford. Folding in a “foreign” country brings home how superb orgami is at bridging language and cultural barriers. In addition, it’s a mind-expanding experience to encournter other cultures. In the following report, I’m bound to forget the names of important people, so my apologies to anyone who isn’t mentioned – I wrote the draft for this soon after, but didn’t expand & complete it until some months later. 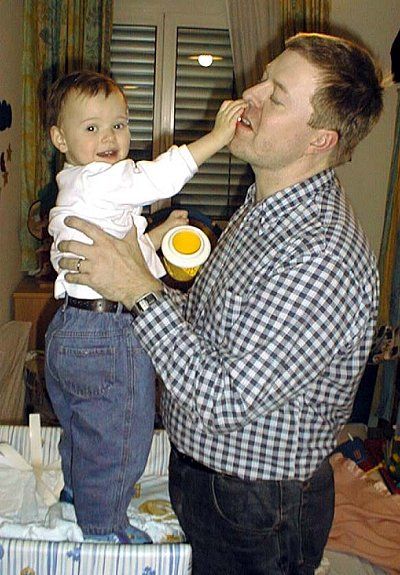 Tuesday: Fly to Geneva via Paris (because it’s cheaper, although the extra hassle involved really isn’t worth it. Strange that in the UK, you can wander through customs with barely a glance. In Paris, there are guards with rifles and mean expressions watching you all the time. We also have to queue for 20 minutes to get through to the Swiss section – just as I near the entrance, “our” customs woman decides to wander off & we have to merge with the next door queue, after 5 minutes frustration. Finally break through & dash to the departure area, where the plane is waiting for me – such power! I arrive in the dark and re-enact the classic “two people with mobile phones talking to each other & discovering we are within 10 feet all the time” scenario.

I spend the night with Edwin & Cinzia Corrie, as well as their beautiful daughter Sarah, in their flat. It’s been a long time since I’ve had the chance to spend time with a toddler and I make the most of it. Anyone with teenage children will understand the warm glow as you remember the times when your own children still where children & not teenage monsters! 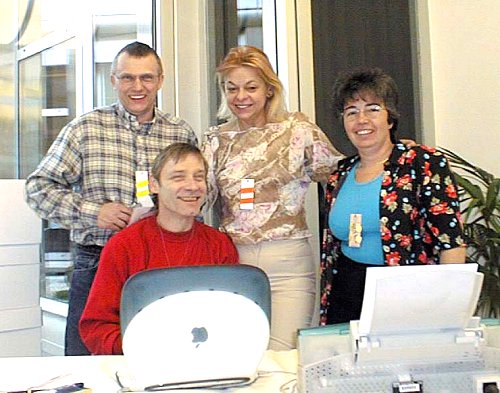 Wednesday morning, we meet Brilly, & Edwin takes us on a tour around Geneva – what a beautiful place! I try to see the Alps, but fail miserably due to clouds. I begin to suspect there are no Alps. We call at a small village and Dave discovers a handkerchief folded into a shirt. Needless to say, he snaps it up. In the evening, visit one of the organisers, Everlyne Cavaliere, who lives on the other side of the French border. She has an origami/computer room much like mine, with books, folds and paper everywhere! We sample a selection of beers and nuts! Thursday: leave for Berne early doors, with organisers Ghislaine & Roland. As with most of the people I meet over the weekend, they are charming and friendly and like most people I meet, speak very good English!

Thursday: The weather is still less than perfect, so I still haven’t seen the Alps properly, but the drive round the borders of lake Geneva provides an endless vista of open countryside & picturesque villages. We stop at a garage near Lausanne for petrol & I’m obliged to sample the local chocolate. We arrive in Berne around lunchtime & head straight for the hotel, about a mile outside Berne centre, looking down onto the town itself. We meet the other main organisers, Patrick Christien (who is the techy wizard) and Patrick Sauthier, who seems to be delegated the manual labour, but does it with a big smile on his face & never seems to complain. 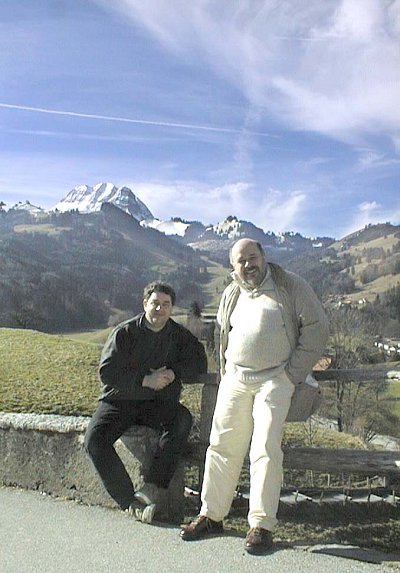 We settle down for lunch & I discover I’m the only one who doesn’t speak fluent French, much less understand it! I try to nod meaningfully from time to time & hope things will get better (they do!). We take the tram to town and head off down the main street to try and see the wild bears, who have a huge pit built for them. Whilst nothing like a perfect environment, I suppose they are well fed and have just about enough room to go for a walk. They live inside a huge building made form concrete blocks and show their disdain for the general public by staying within for extended periods (“quick dear, come inside – he’s got a camera!”) We wait hopefully for ten minutes, but no joy. We find a shop selling the wonderful Naef wooden toys & Dave spends too much money in a short space of time.

The hotel rooms are spacious, with showers, TV and a great view across Berne , towards the clouds which occupy the space where the Alps live. I can see an open-air skating area, with enthusiastic skaters whizzing around non-stop at all hours of the day. It’s tiring just watching! Head downstairs in the purple-leopard spotted furry-walled lift, which has wonderful button gizmos where you just brush the metal to choose the floor – some kind of simple capacitance trick invented 300 years ago, I imagine, but it impresses me. Except of course, when a smiling paperfolder runs their fingers down them all to ensure a slow trip back! 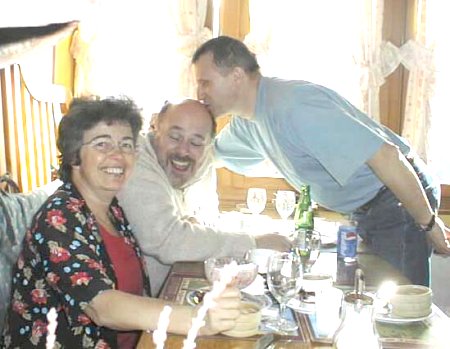 Dave & I sit at the bar to sample some more excellent weissbier beer & have an authentic Japanese meal during the evening. The hosts cope fairly well with my vegetarian requirements, but I have to say the meals seemed somewhat lacking without a meat substitute. F’rinstance, there was fried beef with a side order of vegetables – I got the side order of vegetables. Dave tells me you need several Japanese meals to learn the niceities and that they grow more enjoyable over time. Possible for non-veggies, but I couldn’t help thinking about large cheese & pickle sandwiches. I try to conceal my complete lack of culture & grace. Mustn’t grumble though, it was a fascinating experience and lasted for over 3 hours! 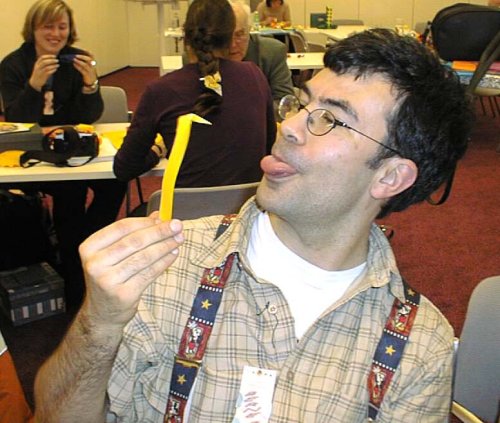 Friday: After a wonderful breakfast & lots of “putting names to faces”, I wander about and admire the effort the organisers are putting in. Things start formally at about 11 in the morning. Lots of exciting guests at the convention: Carmen Sprung (Germany), Paulo & Silke from Freising, Vicente Palacios from Spain, with Tatiana Khliamova from Russia, fellow special guest Pietro Macchi and Ramin Razani from Italy, the inimitable Joan Sallas from Spain plus a selection of the enthusiastic international folders who I’ve met at other conventions.

I start teaching & keep teaching! As a guest you’re naturally expected to contribute a fair share of work, but this is offset by the fact that so many people want to learn your folds and you feel like a minor celebrity! I attempted to dredge up enough French & German to teach my designs, since I feel it’s important to embrace cultures and have a try at the native language. For lunch we went to a food bar in a local supermarket. Very open-plan, with food sold by weight from a “help-yourself” range of stalls. Apparently, these venues are commonplace in Switzerland, but I couldn’t think of many places in my hometown of Sheffield (5th largest city in England) where such a wonderful range of fersh veggy food was to be had at such cheap prices. 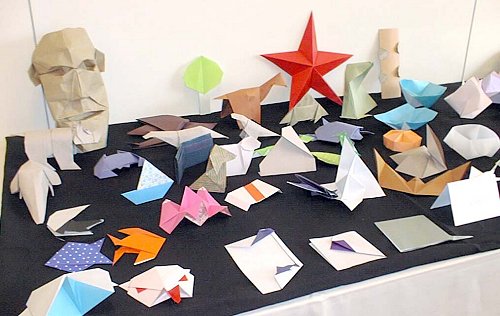 Back at the hotel, the rooms were fairly open-plan, so there was always something going on. One had a wide variety of books and there was another for the exhibition tables. Being a hotel, all facilities were to hand and short of some sight-seeing, we spent the entire weekend in one place, folding & laughing.

The owner of the hotel was a jovial and enthusiastic host, who offers his facilities at very reasonable rates to the paper-folders. We got to know him quite well over the weekend as he introduced me to the delights of Sake and Sushi and advised on the best beer for those with high blood pressure (red!). More beer later that night. By 11pm that night my head was spinning with the effort of trying to communicate in not one, but two foreign languages. After admiring the view from my window, I slept the sleep of the dead (tired). 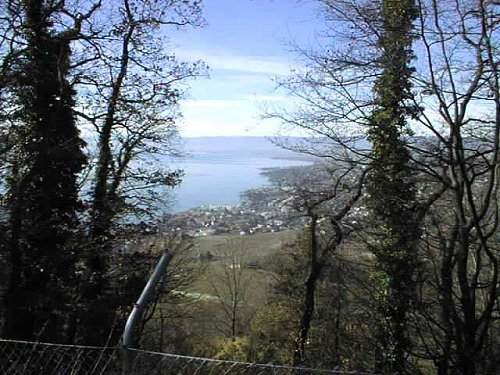 Saturday lunchtime, after my teaching sessions, Dave and I took a tram into town and we sampled the fare at a local pub. I have to say, throughout my time there, I was overwhelmed with the quality and range of food on offer. It put our English efforts to a shame, I’m sorry to report. I attempt again to speak my best German, but after 3 or 4 words, the host says “I can speak English”, having quickly spotted my place of origin. I see that as the ultimate test of fluency – can you pass for a native speaker? We actually spot a seedy looking bear in the pit! That evening, a masked ball was held, where we exhibited our best origami masks. Mine completely covered my face & was stifling, so I put it on the back of my head and attempted to walk downstairs! I was then asked to try “wind-folding”, where you try to fold a crane from a large sheet of thin paper, with three electric fans pointing at you! You really have to “go with the flow”. If you think that’s easy, just you try… We present the host with a wooden boat full of tiny origami – it looks winderful! 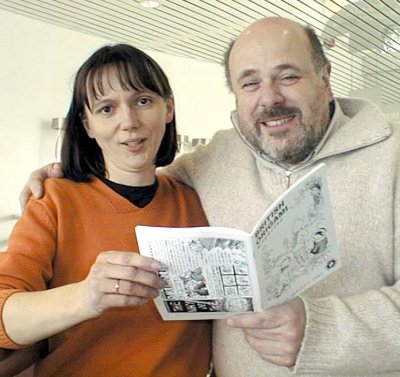 Sunday was a little slower as people tried to find new reserves of energy with the help of a nearby coke machine, but all went smoothly until around 3, when there was a formal closing. The special guests were presented with a certificate of attendance and everyone passed round the convention packs for signing. I hope I have provided good value for money & am suitably grateful when it is time to thank the hosts for inviting me. About a dozen of us stayed Sunday evening for another Japanese meal. This turned out to be a story by itself, as Patrick took over from the Japanese cook and prepared out food in front of our noses!

Monday. On the way home, Roland & Ghislaine took us the scenic route via Gruyere, where we stopped at the village itself & invested heavily in cheese. I was a little surprised to see a museum dedicated to the artists HR Giger, who has a local connection. His outre creations seemed a little out of place in the traditional surroundings. It was highly memorable breathing in the rich, heady atmosphere of the Alps, which were revealed in all their sunny glory, for a change! A local pub provided a meal & some local beer, then back to the car, pausing for a few snaphots.

The whole weekend was superbly organised by the small but efficient group and I’m sure everyone present will consider returning for the next one. I shall always be grateful for being invited and the memories will always be with me, aided by some low quality photography!