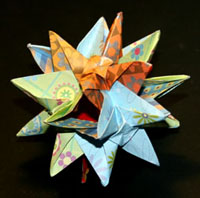 At a mini-meeting in Hazel Grove (near Manchester) yesterday, I re-learned a model from the distant past. I can’t remember where or when I last saw it, but it’s a 6 piece modular made from a blintzed bird base.

This got me thinking about the BBB, which few of the attendees at the meeting seemed to know about. Back in the late 60s, the BBB was seen to be the ultimate base – you could make almost anything from it – dragons, horses, beetles, even a grand piano (Pat Crawford). When I started folding in the early 80s, it was still a talisman for beginners. Who would ever want more points from a base? How naive they were 😉

To make the modular, sink the top triangle by half its length, then fold each of the four lower flaps to the top. Open each flap out at right angles to the next. Form a ring of four, ticking corners under sink edges, then add two more to form a cube arrangement. It holds together reasonably well, although smaller versions are tricker to assemble without glue. Almost a joke there.

I did a quick google and found no immediate diagrams for either the module, or surprisingly, the BBB itself, although it’s used in passing here https://www.barf.cc/nuccrane.pdf As you can imagine, it’s a square, blintzed, from which a bird base is folded. The blintzed flaps can then be eased out again. The method I prefer, created via a  waterbomb base, is shown below.

update : I’m told the unit is by Nina Ostrun and is diagrammed here although I still feel in my bones I’ve seen it a long time ago.