I was recently invited to attend a book-signing as part of a “local authors” week at Waterstones (probably the UKs biggest high street book retailer). The event also helped promote a new Paper Chase department, but nobody told them I was there, so they had no origami paper to sell. Hmmmm….

I’m always slightly concerned people might mistake me for Jeremy Clarkson (a UK TV presenter renowned for his ignorance) , but since it looked like fun, I errrr signed up. My daughter always encourages people to look for unsigned copies of my books, on the basis that they are rarer, but truth be told, other than at origami conventions, nobody knows who I am and I hope to keep it that way!

Signing books is an honour, people have invested their cash in one of my products and I’m always delighted. At this particular signing, lots of people brought their children over and said “this nice man will make you some toys while we look round the shop”. So despite being busy for two hours, I only managed to deface one book and I suspect even that purchase was out of pity 😉

The table I was given turned out not to be a table, but a box, so I was unable to position my legs underneath it. This meant folding was rather taxing, leaning forward and trying not to look weird. However, the monstrous jugs of hot chocolate helped ease my pain. 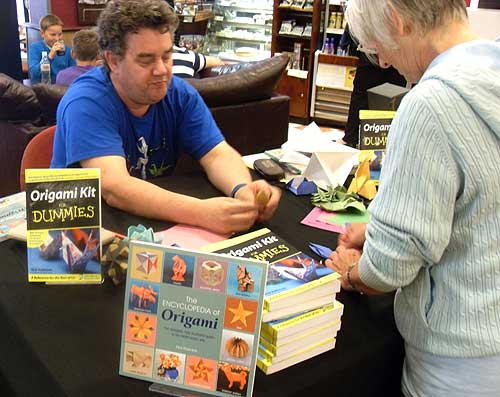