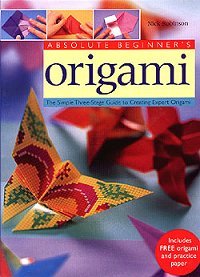 Released in 1999, this was my first “real” origami book, i.e. one not about flying objects! I took over the project from another well-known author, who had to pull out due to ill-health. This meant a generally tight deadline and consequently little time to source and obtain permission for exciting and unusual designs. It has traditional designs, plus some of mine, a superb Santa by Ishibashi, Takegawa, Neale and Pam Bisman. As ever, the American version has models on the cover that aren’t in the book!

With a major exception, it turned out quite well. The ring-bound format is especially useful and a free pack of paper was included. The photography was pretty good, although I’m still not convinced that photographs alone are the ideal solution. I’m trying to persuade publishers to let me add standard origami symbols to the photograph – they just don’t quite grasp how efficient they are in communicating folding instructions. To my mind, a combination of photos & symbols would be pretty near perfect, other than the extended time required to prepare them.

I mentioned a problem. One of the publishers ideas was to have a “quick reference” at the foot of each page, reminding the reader how to perform standard bases and folds. I sent down artwork to be copied. This was returned, full of flaws, at the last minute. I contacting them immediately, pointing out that they needed substantial, though not difficult, corrections, and posted these down the same day. I confirmed with them that they had arrived & heard no more, assuming all was well.

Imagine my surprise when the book arrived complete with unaltered artwork! Another surprise was the “gallery” section at the end, in which they had photographed some sample models I had left at our initial meeting. They were never intended to be used and were made to a lower standard, from paper I wanted to use up. To see them in the finished book was, well, a big surprise! It seems that each book brings it’s own lessons and I’m fairly philosophical about it all. The faults don’t spoil the majority of the book, which is colourful and attractive. It’s been translated into Italian, French and German, although I haven’t been sent a copy of these. More recently it was reprinted, with the opportunity to correct the mistakes overlooked.

Some review comments below – the second is beautifully titled 😉