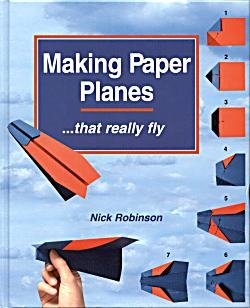 Following in the Robinson tradition of releasing paper plane books with almost identical titles, here’s Making Paper Planes that really fly. Published on Silverdale Books by the same team for “Origami Animals”, it follows a similar pattern of step-by-step photos, but this time I also added artwork to show the usual origami creases. I think the combination of photos with symbols is potentially the best.

The design stage was a bit tortuous, with artwork lost in the post and so on, but the final book is pretty good and has hit the book shelves to a wave of massive indifference, unless you know better! I have certain knowledge that it is available at a knock-down price in a remaindered bookshop in Matlock Bath, if you’re passing that way.

The designs are mostly new Robinson originals, meaning that they will ALWAYS fly further, higher and faster than any any rival designs out there.

Time Passes. A year goes by with nothing to show but more grey hairs. It makes me look distinguished, apparently. Sterling in the States have now published this epic, so fingers crossed it will now go on to sell 3 zillion copies, although I’ll probably not see any extra fees ;(

It’s been translated into German, cunningly using the same title as two other airplanes books I wrote that were translated. Talk about confusing 😉