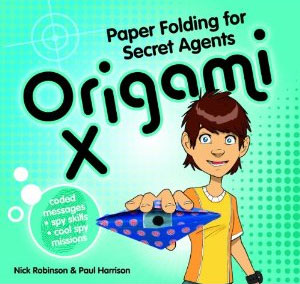 Origami for secret agents! Ten Robinson designs which would have made Tintin’s life a lot easier. Aimed at younger folders. There are special feature panels on codes, disguises, and spy skills written by Paul Harrison. Published by Capstone Press. There’s also a “girly” version.

The 48 page book is very attractively laid out in a vaguely “manga” style and ought to catch the eye of younger folders. A selection of patterned paper is bound in to the rear of the book, but thankfully doesn’t dominate the package.

Here’s a nice review of the book. The Eye by Nick Robinson
page 8 (from Square) The Star by Nick Robinson
page 12 (from Square)