My mate Wayne and I are putting together the Model Collection for the BOS spring convention. One idea we thought we’d try is to indicate a level of difficulty for each. We both feel the current systems don’t do the job wonderfully. So what options do we have?

The standard used by Origami USA is to one assign from the following list; simple, low-intermediate, high intermediate, complex and super-complex. The latter is “anything that takes over three hours”. Whilst this is a laudable attempt, it’s still very hard to decide what about a model determines its complexity. Clearly, the experience of the folder is a key factor, since what is tricky to one is childs-play to another. We don’t know in advance who will fold the model, so is this one variable we should exclude from a classification? 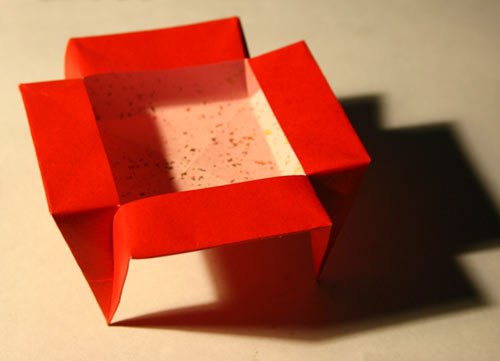 One of my dishes – a simple enough crease pattern but a real sod to fold!

Perhaps we could count the steps, factor in how long it takes someone to fold it and produce a formula? Maybe each technique should be assigned a number and once again, a formula could determine complexity.  Another possible variable is how many times do you need to fold a given model to produce an excellent example?

Some Yoshizawa designs, for example, can be completed relatively quickly, but never really look impressive until you have made them many, many times. Other designs, like many of those of Komatsu, are sequenced so that you can produce a clean, neat example far more readily.

I’m not sure that the OUSA five-tier system is capable of covering the whole gamut of origami complexity, but alas, I have no better alternative. In previous books I have used 1/2/3 flapping birds, airplanes with 1-5 on them and several other devices which only give an indication of relative complexity wihin the book. Maybe a number rating of 1-10 might allow greater accuracy? Another alternative is to say “if you can fold this, then you can fold XXX”, so if the student can make a flapping bird, they are ready for a waterbomb. But are there standard models that everyone knows to use as a practical reference in this way? Probably not!

So, we have a problem on our hands. Your thoughts and input would be most welcome!

I’ve just attended (virtually) an origami meeting in Munich, at the house of Susanne & Oliver. I taught two folds using a webcam (via skype) and could see onscreen that at least one person understood and followed my instructions! OK, the video pictures weren’t brilliant, but this could be a really good way of broadening the international attendance at origami meetings. The chap standing on the right is Klaus Deiter Ennen.

I work regularly in schools, usually offering a class a week for 10 weeks or so with 7-9 year olds. (see “teaching” link above right) This allows me to develop a relationship with the children, to gauge their individual strengths and weaknesses and to try and develop each student as far as I can. Some classes are a delight from day one, others prove more challenging!

So it’s always a great delight when a class seems to suddenly “get it” and starts to become truly creative. One such class is in Sheffield, who continue to surprise me with how they have taken to folding. They show great imagination, creativity and yesterday, one student (aged 9) presented me with a set of diagrams for a pencil she had designed (I show them on a whiteboard how they can make their own simple diagrams) . One of the students with educational needs has become quite an expert and only needs showing a sequence once to remember and recreate it. Here is some of their work, you can see how important decorating is to them.

I’m off folding in Freiburg today, so updates may be thin on the ground until early next week. 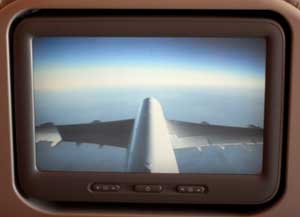 A few weeks ago, I had an email from the British Council in Dubai asking if I could pop over and teach the basics of origami and kirigami. I know this is an origami blog, but forgive me if I give a slightly broader picture of my visit – I’ll try to leave out the personal trivia!

After a couple of seconds thought, it was agreed. They had seen a previous connection with the V&A museum and were hosting exhibits from the Jameel Prize, an exhibition of contemporary artists and designers inspired by Islamic traditions of craft and design.

Thankfully, given my propensity for confusing myself, all the travel and other arrangements were organised by Anita and Dalia from the Consulate, so all I had to do was leave home at 8.30am and arrive in Dubai at 3.15am the following day. The airplane seats had several fascinating cams to choose from and as we were catching up with night, darkness came sooner than expected. 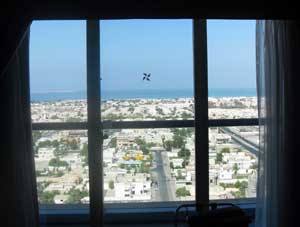 from my hotel room

Despite the locals assuring me the weather had started to cool, it was perhaps the hottest place I’ve ever been to. Any thoughts of randomly walking round were quickly dispelled and I spent far too much time on the top of the hotel, watching the sun set from the hotel pool.

On Saturday, a taxi arrived to take me to the Sharjah Museum of Islamic Civilisation, a 20 minute ride from the centre of Dubai. I was delighted to see that Sharjah was far more representative of normal life than central Dubai with it’s gleaming spires. The teaching session was oversubscribed quite considerably and I ended up with 40 or so students, including a group of special needs adults. 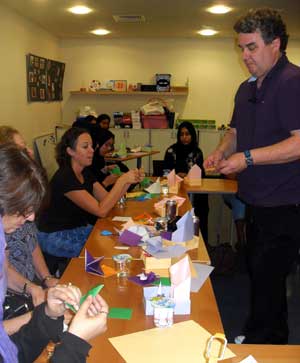 I used my usual selection of simple designs and with the aid of various museum staff, the class seemed to be very successful. There were a few English people in attendance, along with several other nationalities and, of course, quite a few local people.

The paper supplied came in small plastic boxes and turned out that every sheet had already been pre-folded in half twice! I had requested squares from A4, but they didn’t materialise. The paper was also fairly low quality, but I was probably the only one to notice this!

I spent half the time with origami, then taught the basics of kirigami – it wasn’t long before the floor was littered with confetti! Like all new buildings, the room was air-conditioned, so the three hours passed smoothly.

I was recommended to check out the “Dubai Mall” in the evening, which was reached via the metro (where I entered a “women only” carriage) then a feeder bus. It turned out to be an utterly faultless tribute to Western capitalism – a monstrous  (440,000 sq ft) shopping mall with live sharks, waterfalls and shops heaving with  expensive goods.

The food section contained every US brand I’d ever  heard of, not a solitary choice of “local” food. My dau 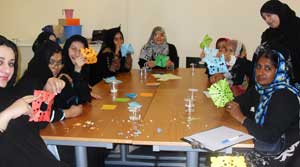 ghter would have loved it. Slightly depressed, I went back to the hotel roof to gaze once more on the amazing 360 degree view of Dubai by night.

Sunday a.m. I taught a group consisting of various museum staff, most of whom were educators of some kind. Remembering my advice not to touch the women’s hands, we had a great time. I checked in advance about how formal to be in my teaching and was relieved to find a chilled out attitude was fine. I tried to give a “pocket guide to teaching origami”, but with only 3 hours, could barely scratch the surface. I just hope some are inspired enough to continue.

In a Persian market…

At lunchtime, my assistant Dalia and genial museum guy John (from Scotland via Nottingham) took me to a local market place for perhaps my only true glimpse into real life. We had a wonderful biriani served in the local style and Dalia did an amazing job haggling down the cost of presents for the family.

In the afternoon, I burned a sizeable wad of AE$ taxi-ing to some of the older areas that Dalia had recommended. One seriously old market turned out to be closed, but I did get to meet some local moggies to have a chat with. 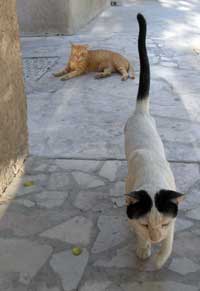 6pm, up on the roof (again), the piped music from the hotel mingled strangely with the voices from the several nearby mosques. I felt it was the sound of the Arabic soul crying for the loss of their heritage. I get these kinds of thoughts sometimes…

Everyone I met was unfailingly polite and helpful, but it seemed to my untrained eyes that Western culture had imposed itself rather forcefully on local people, many of whom were apparently forced into the suburbs where life was more affordable. I was also surprised to see no signs of solar energy gathering, in a place where you could probably power an entire house from a few panels. A 5am start on the next day saw me reluctantly leave the UAE and head back to Manchester, where (shock horror), the sun was out.

I’d like to thank all the staff at the consulate who were efficient and friendly, all the staff and students at the Museum, my taxi driver, (who tried his best to explain the basics of Islam to me) and the hotel staff at the Sheraton. Plus, of course, apologies to my wife and daughter who really wanted to come along!

The traditional hat-to-boat from a rectangle forms a regular part of my teaching classes. It’s fairly simple, involves some nice “in the air” open & squash folds and makes a superb boat with sail. I also regularly take newspaper with me to deliver the classic “captains shirt” story, which never fails to amuse young and old. There’s some more useful info about the model here.

One method I often employ to reinforce learning of a design is to have students fold it again from paper half the size. They then repeat this process and a friendly “how small can you go” competition often ensues. The boat is perfect for this and you can also introduce the concept of A4 / A5 / A6 etc. if you wish.

The boats also tuck neatly into each other, providing you fold such that a decent sail is produced. I’m sure you know, but the ratio of sail to hull is determined at an earlier stage, when you fold up lower corners.

Folding to the top produces a sail level with the top of the hull. Folding less than this distance produces a sail. Eventually, the hull is tiny and the sail huge. Encourage the students to investigate the possibilities.

A few years ago I discovered a development of the boat, one which I haven’t seen before, although the chances are it’s already “out there”. You perform another “open & squash” move, swinging each end of the hull in opposite directions and you have a fish. Neil Calkin points out in his comments that you can take it at least one stage further, producing a kind of gondola, although this may well be beyond the capabilities of a novice folder. Further iterations will depend on the thickness of your paper!

These ideas further extend the possibilities of this sequence, (providing you don’t tear to form the t-shirt!) allowing you to make “sea” montages by using a large sheet of blue paper, drawing a line to represent the horizon, and adding boats (and birds) above the line, fish below. A sharks fin is easily formed by folding a square in half, try setting this as a creative challenge. 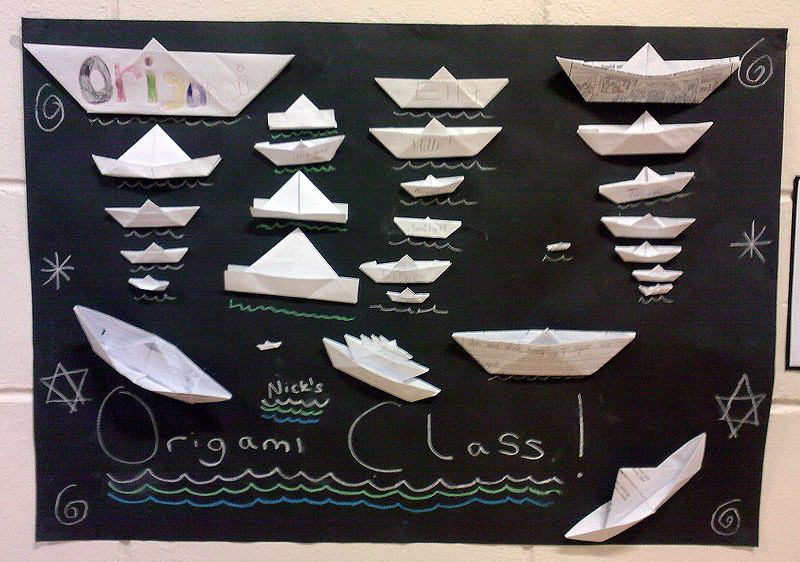