I spend far too much time scanning the web for obscure origami books from the dim, distant past. Amazon and E-bay make life considerably easier these days, although you need to watch out for a sting in the tail with the postage. One series that fascinates me is the “Collins Origami Storybook” set from the early 70’s. There are four titles; “Brave Warrior”, “Leaf And Stream”, “Thunderbird” And “The Spear Thrower”. All involve stories with a vague ethnic / nature feel, incorporating six characters that you can fold. Sheets of pr

e-printed paper are included along with folding diagrams.

If you look in remainder shops these days, there are any number of (tacky) “origami kits” where you fold the pre-printed sheets into animals to play with. What makes this set slightly different is that they have what I like to call “integrity”. The stories are interesting, the artwork is quite appealing /kitsch and they contain a deal of what would nowadays be called an environmental / ethnic theme. One even features a character called O-Kuni!

The models themselves were all illustrated (and presumably created?) by a jobbing illustrator called Brian Edwards, himself an author of several books of “things to make and do”.  What’s interesting is that, for the time, they represent quite interesting models, technique-wise. Whether Edwards had any previous interest in origami is unknown, but he seems to have had a flair for it – his diagrams are nicely 3D.

The set of books were reprinted in the 1990s under different titles (Origami – Indian Lore, Origami Master, Forest Animals, Origami Dinosaurs) although none had the charm of the originals. 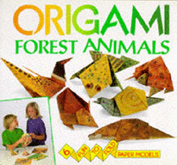 If you like interesting items in your library, I recommend adding this series to your collection. Don’t pay more than a fe

w pounds for the books themselves though – I found at least one sale where the suggested price of £70 was ambitious, to put it mildly! If anyone finds a cheap 70s copy of “The Spear Thrower”, let me know, I need it to complete the set.