As all origami enthusiasts will be aware, there has been an “underground origami” site around for some years. Despite some criticism and mockery, Zack has continued to expand his site and long may he continue. His efforts led to a number of publishers approaching me to put a book together on the subject. One simply lifted the designs from the web and published them, to their cost. I’d been “featured” in a book called “Men and Models” by New Holland Publishing and exchanged some friendly emails with their top bod, Gareth, about possible follow-up titles. As things do, we got around to discussing adult origami and history was in the making.

Working to a remarkably relaxed schedule, I had free rein to provide whatever text and artwork I felt suitable. Amazingly, 95% of it was accepted. The American publisher did put their foot down on the “lonely shepherd by moonlight” image. Otherwise it’s ended up pretty much how I intended, complete with a carefully-researched history section.

I contacted the few origami designers who dare to admit they design this kind of thing and was delighted when Marc Kirschenbaum allowed me to use one of his designs (“coupling”). This doubled the pain I felt when I realised he hadn’t been credited in the book – an oversight I deeply regret. In addition, I was lucky to include Kunihiko Kasahara’s beautiful “mons”. The others are my designs, although there are similar ideas knocking about out there.

Now the question on your mind is “what’s an upright, cultured & refined paper-folder like yourself doing with all this smutty nonsense? Well, it isn’t pornography. Not as I understand it anyway!

It’s not designed to, and is very unlikely to titillate. It’s folded for laughs (although I like to think the origami designs are carefully designed and elegant to fold) and if it isn’t your cup of tea, that’s fine, don’t buy it! However, I think origami, for all its attractions, can tend to get a bit po-faced and lacking in humour from time to time. I see it as my task to try and generate the odd smile wherever I get the chance. Art should have humour, it should have challenging subjects and yes, it should have boobs and willies. So should origami!

We agonised over the cover and they came up with what I think is a highly tasteful and classy cover. The American version has a different title and a less classy cover. Still, these people must know their market. Dedicated adult origamians will clearly want to own both versions, even though the contents are, well, identical.

It’s been fascinating doing a google to see how the books are being pushed. Somebody’s blog asked the question; “who bothers to sit down and write this kind of stuff?” If they search about, they’ll find out it was me. It’s being carefully targetted – this advert appears on a site for children called “developing mind”! They may develop other attributes as well after reading this! 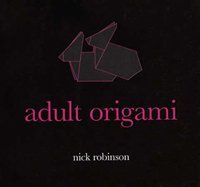 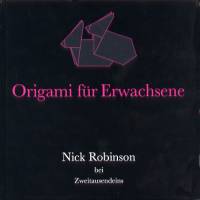 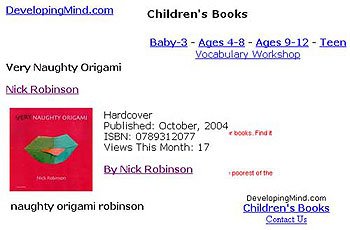 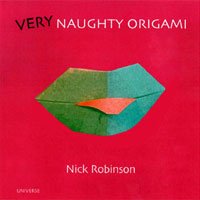 Schwanstucker by Nick Robinson
page 18 (from Other Rect) Condomigami by Nick Robinson
page 22 (from Other Rect) Going Down by Nick Robinson
page 78 (from Square) French Tickler by Nick Robinson
page 84 (from A format) Memphis Bell by Nick Robinson
page 90 (from A format)

We use cookies to ensure that we give you the best experience on our website. If you continue to use this site we will assume that you are happy with it.OkPrivacy policy