With “Angel Origami”looking so good, the publishers were interested in any possible follow-up. I explained how origami has links with Buddhism and lo, this project was born. Initial hopes that I could go into some depth on the paper/buddhism relationship fell by the wayside and it is a book for crafters, folders, but possibly not students of Buddhist philosophy! Here’s a fascinating article by the late David Lister on the subject.

I was sent a list of required subjects and submitted ideas to the publisher. Eventually, we produced the final list and I contacted the relevant people for permission. Designs include those by Saburo Kase, Leyla Torres (a frog based on my “toad”!) , Kunihiko Kasahara, Wayne Brown, Hanneke Van Der Kruit and the rest are my own work. Sadly, for only the second time in my writing career, I’ve managed to omit a creator from the list of credits. Evi Binzinger, who created the wonderful “Temple Boxes”, doesn’t appear on the end credits. How this omission occurred, I’ve no idea, I can only offer my sincerest apologies and ask for an amendment on any reprints. As ever, I’m eternally indebted to the creators (for this and all other projects) who generously share their work with me.

I’m delighted with how the publishers have laid it out. Great colour photos, free paper, colourful, elegant, what more could I ask for? Apparently, it’s been been sold to a Korean company and will be translated into that language – my first book in Korean.

Sadly, the publishers have taken a decision not to produce any more “instruction” books, so this and Angel Ori look likely to be the end of this particular line. I had visions of a series encompassing Jewish, Islamic and several other themes.

The book is dedicated with love & respect to the late Krys Zasada. 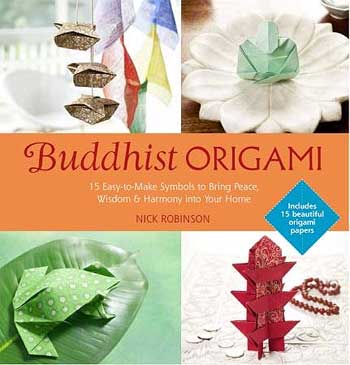 Pagoda by Traditional
page 22 (from Square) Lotus of Peace by Traditional
page 28 (from Square) Vase of Wealth by Saburo Kase
page 32 (from Square) Fish of Harmony by Nick Robinson
page 50 (from Square) The Foolish Monkey by Kunihiko Kasahara
page 54 (from Square) The Wise Frog by Leyla Torres
page 58 (from Square) Contemplating the Turtle by Nick Robinson
page 70 (from Square) Buddha in his altar by Kunihiko Kasahara
page 88 (from Square)