A good friend of mine, Paulo Mulatinho, had written an origami book for a company called Augustus Verlag. They had obtained translation rights for my first airplanes book and were looking for a follow up. Paulo made the introductions and I was offered a contract to write a new one for them.

It was an object lesson in the use of technology – I drew the diagrams using Adobe Illustrator, emailed them to Germany and never actually met or really spoke to anyone involved!

The book turned out very well, and what a delight to have your illustrations used in their original form, not “improved” by in-house illustrators. I incorporated my favourite drawing feature, that of gently curving the sides (using a filter named “punk & bloat”!) which gives the artwork a much less rigid feel. Note also the use of the “fold with feeling” symbol which I originated and Paulo drew for me.

The models I lovingly folded and sent over to Germany for photography apparently arrived in a crumpled heap, so they were remade by Heinz Strobl, himself a talented creator. Such is life.

The cover (to my eyes) is a bit uninspired, plus it has the brillant marketing device of using the identical name to my previous German language book. I can only imagine how many sales were lost by people thinking “I’ve already got that book”, when in fact it was totally different. 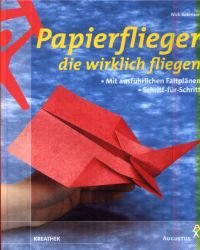