Quite a landmark for me, this volume. For the first time, I made a decision to feature my own work. Now I’m all in favour of giving exposure to the work of talented origami creators and I’ve tried to be even handed in this with my previous books, although the ever-decreasing deadlines don’t allow for a lot of chasing up of permission and there have been times when I’ve been obliged to “create to order”, especially in the paper airplanes department! However, when I was contracted to write a conceptually similar book, it seemed like a good idea to get the best of my own work “out there” and use the other book to feature other folders’ work.

Added to this was the complete freedom offered by publishers Collins and Brown to shape the visual aspects of the book, to supply finished artwork, to choose the designs and general direction. So I’ve tried to get across my origami philosophy, such as it is, allied to the thoughts behind my various creations and offering possibilities for building on these techniques.

The book is divided as follows;

History of origami written by David Lister
David, as you may know, is one of the leading authorities on the development or origami. His numerous articles on the BOS website are ample testimony to this. However, he rarely gets the opportunity to put his thoughts in commercial books. I wanted a “history” section and so asked him to contribute. To my immense relief, he agreed. It was then simply a matter of balancing David’s desire to offer a lengthy, balanced article with the publishers desire not to take up too much of what is ostensibly a practical book.

Essentials
Choosing paper, basic symbols and basic folding tips. Although the book is accessible to an origami new-comer, I anticipated it will be read by slightly more experienced folders, so this section is relatively short.

Bases
Including most of the simpler standard bases, alongside creating 60 degree angles and looking at crease patterns.

Creativity
Some ideas for approaching origami from a creative perspective.

Practical folds
CD cases, wallets, envelopes etc. Including an old photo of my darling daughter, much to her disgust.

Wet folding
A bit briefer than I’d hoped, but including some photos to show you the more 3D approach required by this technique.

Complex
Some will argue with this classification, but by my standards, these are complEx designs

Gallery
This is the section I had least control over, relying on the publisher picture researchers to come up with the goods. This proved harder than we thought, so I supplemented it with some photos I took at a recent BOS convention. Whilst not quite as brilliant as I’d hoped, it should still open people’s eyes to what origami can offer.

The photography was excellent – Neil Sutherland had the idea of shooting the finished models on a large sheet from some distance away. This allowed us to use the photo as the backdrop to the entire page, giving it texture and a very pleasing tonal range. Far better than the usual technique of cropping the model and applying a photoshop shadow! Thanks Neil. Whilst a softback, the cover feels thicker due to fold out sections reminding you of common symbols and bases.

Overall, I’m about as pleased as I could be with the book (unlike many previous volumes!), even if the photo on the cover is awful (one of the wings isn’t lying flat). Then there’s the issue of the title. I didn’t choose this and as a believer in the humanist approach, fought as hard as I could to change it. When this failed, I asked at the very least to have the word bible uncapitalised, which is the common form when the word is used in this way. My special thanks to Mark Robinson (no relation) who proof-read the diagrams with diligence. I’ve been writing two other books at the same time as this one and the tired origami brain tends to correct errors unconsciously. Without his efforts this would have been a book riddled with minor errors.

I had visions of irate fundamentalists in the deep south burning huge quantities shouting “blasphemy!” (as long as they bought the copies before burning, I can live with that). If anyone does take offense, I can only apologise. The PR team of the American company that commissioned the book felt it was a great idea.

Anyway. I may be biased, but I think the visual aspects of the book have class stamped all over them. As for the contents, I suppose it’s for others to judge, but I’m proud of the work. It represents quite a few years creative struggling. Let’s see how this one does. Touch wood it will avoid the remainder shops for a good few years! I’m also on a royalty for it, so I urge you to buy a copy for all your friends.

A couple of alternative sleeves seem to have been mocked up and are used to advertise the book, but as far as I know, neither were actually used. It’s common practise to do mock-ups to pre-promote the book and the eventual cover is rarely the same!

Several people have written to me asking for diagrams for the dollar-bill dog, but I can’t even remember where it came from – although it may well be a design by Stephen Weiss. I found it in a box of models and it was used as a test photo.

ps. Over the intervening years, this book has stiffed big-time and I’ve never seen a penny in royalties. I put this down to the combination of cover image and title and curse the advertising genius who approved them! 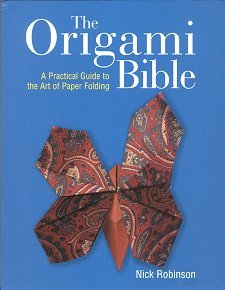