On Wednesday, I flew out to Basel from Manchester, where Joan Sallas’s flatmate Sacha Pooch was kind enough to drive me to their apartment in Freiburg. There I met Joan, Sacha’s wife Kristin and two other folders who were there for the conference, Ariane and Luise Schreiter.

I am obliged for reasons of politeness to have a drink and some käsespätzle in a nearby bier stubl and finally hit the hay, in Joan’s generously vacated room. My mind won’t stop whirling as I anticipate a fascinating few days!

Thursday morning, we enjoy a typical German breakfast of excellent bread and cheese and I meet the two young Pooch girls, Nehle and Lina, happy, smiling and so beautiful. Nehle gives me some useful German lessons over the weekend.

Joan has a teaching session scheduled at a school in Freiburg, so I tag along with Luise and Ariane, to watch him in action. After takng what seemed like 20 different trams (some slight confusion over where we were going!) we arrive just in time to teach the children at school.

I teach a simple model, but Joan is so at ease with these young children and teaches designs using a fascinating stream of invented stories. He is a delight to watch. 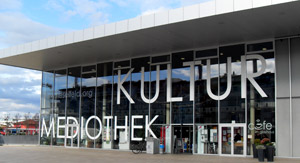 The rest of day is largely spent preparing information, paper, name tags and so forth, a quite amazing amount of work, since all participants were given several pages of information, a box with their name stuck on both sides, a “didaktiks” banger, a paper bag with origami stickers attached, a pack of 10 different colours of paper (all hand collated), a hand-made name tag and more besides.

Multiply all this by 170 or so and you can imagine the work-load. We also pop out to the venue, to check the rooms, facilities, get master keys and so forth. Everyone works until the wee small hours. 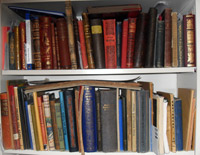 a small part of the Sallas library

Friday morning, we haul everything out to the venue, including two large wooden display cases for Joan to show a few of his many historical texts. I must take a moment to eulogise about his library, it’s massive and fascinating, taking up an entire side of his room. He chooses to sort by age and has section starting from the 16th century, right through to the modern day. There are plenty of “folding” books, but the majority are textbooks or educational documents relating to his favourite subject, the history and development of paper-folding.

He has searched far and wide through antiquarian bookshops, ebay, libraries etc to further his knowledge. In many ways, the weekends’ conference reflects his unending fascination with this area. As he points out, if you want folding, go to an Origami Deutschland convention – the Didaktiks weekend is about history, diagramming, teaching, learning and all the academic areas that underpin paper-folding. That said, there is a lot of folding gets done during the weekend 😉 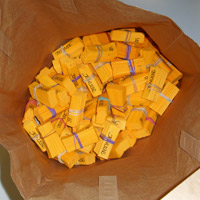 By 3pm, people start to arrive and young Luise runs the registration table with some other volunteers. Throughout the weekend she shines as highly professional (and indefatigable) admin officer, belying her tender years. I sit and pretend I understand the rapid-fire and technical German I can hear. It always takes me a few days to “tune in” to the various accents on offer.

We continue to fold calendars, a clever idea of Joan’s requiring a preprinted calendar to be folded down into a tiny package held together witha  rubber band. These are sold cheaply to help offset the running costs. The other volunteers are also in a state of continual motion, preparing tables, chairs, boxes, food, washing plates, fetching water and general problem solving. I often feel the only real problem at a convention is the attendees 😉 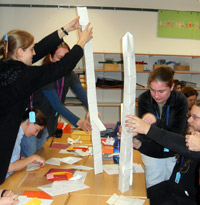 fun in my class

There is an opening ceremony, chat/informal folding, then dinner. I have to drag myself away from the cheese early, since I have a class at 7.30pm. The classes are both in the main building as well as an adjacent school, where five simultaneous classes run throughout the weekend. My seminar title is Neue Ideen von Alten Modellen (New Ideas from Old Models), using and extending traditional models to reinforce folding skills. It perhaps sounds perhaps more impressive than it was.

I took people through my extensions to the hat/boat sequence, as well as a variation of a traditional boat allowing it to become a picture frame-cum-bracelet. We discuss all kinds of other topics and it’s clear that the audience are creative thinkers with many ideas to share. To end, I show a simple triangular “building module”, an origami lego, conceptually. The class seem to enjoy this and skyscrapers soon reach towards the ceiling. More chatting/folding ensues back in the main hall and it’s yet another late night! 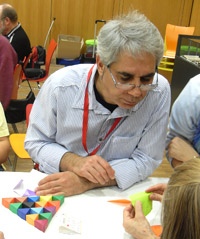 Saturday morning saw more people arrive and we have Robert Orndorf from America, Paolo Bascetta from Italy and the Burczyks from Poland, amongst many others.  and brought the first of several difficult choices; which classes to attend! (for a list, visit https://www.origamididaktik.de and click on “workshops”). I

n the morning I thought I’d try something that wouldn’t place huge demands on my abilities and attended a workshop on simple envelope designs, led by Heide Karst. In the 1.5 hours, we managed to fold around 12 delightful designs and I was honoured to be asked to teach my “Daisy’s envelope”. It’s been so long since I taught this, I almost forget it (fold all corners to the centre of an A4, tuck into each other) but we got there in the end.

Heide, always very amiable,  is high up in the ranks of ELFA (Envelope & Letter-Fold Association) and has an amazing archive of diagrams and folded examples of envelopes. Her fellow ELFA member Elsje Van Der Ploeg was also at the convention and gave me a fascinating booklet on the “Lovers knot”. 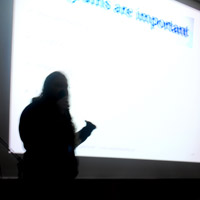 A typically German lunch is dished up by the ever-willing team of volunteers and eaten by an even more willing set of folders! In the afternoon, I attended a seminar by Gerwin Sturm (from Austria) entitled “The Golden Rules of Diagramming”. Since both he and I use adobe illustrator, I found his talk fascinating and enlightening, with several new approaches to diagramming that I will be investigating.

It’s a delight to hear someone so obviously in love with his subject. I met with Andrea Thanner, still rosy from her wedding and we discuss the origami world in general. By 7pm, I am suddenly hit by a wall of tiredness (too many consecutive late nights) and reluctantly head back to my apartment where I sleep the sleep of the dead.

Sunday morning sees everyone ready to roll by 10am and we troupe into the nearby school for more seminars. I choose one by Joan Sallas, about the history of folding symbols. He uses a laptop to present some of his findings, including what he believes is the earliest film ever made of origami instruction. This was footage shot by the pre-war German government, showing how to fold several simple designs. Once again, this is fascinating and time flows by all too quickly.

Following lunch, Carmen Sprung leads a group session where she silently teaches a model, one step at a time, to the three nearest tables. They in turn pass on the instruction, again without words, to the next table, and so on. We end up with the desired result, but it has opened everyone’s eyes to the issues of non-verbal communication of origami sequences. Eventually, things wind up and people sadly start to bid each other farewell.

A group of the organisers visit a Chinese restaurant later that evening, tired but also elated. We spend far too long trying to find a better name for the weekend’s event and struggle to find a snappy alternative way to say “Didactics”, in German or English.

This is the 5th such conference and each year more people register, so word is clearly spreading. It’s most definitely not aimed at your typical paperfolder, but at those who like to think about ways to teach and about the history and development of origami instruction. I found it refreshing to meet so many people who enjoy “thinking” about origami as well as doing it. 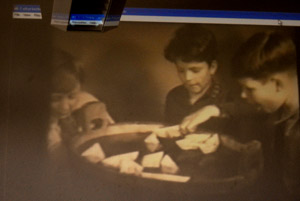 The approach of the weekend is an academic one, but not in a  high-brow sense. The attendance fee is kept at a minimum by self-catering and also by offering free floor space in the nearby school, where you can turn up with your sleeping bag and spend the night in company.

I find origami conventions becoming increasingly expensive and sometimes feel that you pay a surcharge for the architecture of the building. Many folders are unable to pay for such luxuries, so it’s to the eternal credit of Joan and his team that they are so focussing on keeping costs down.

My deep thanks to Joan, as well as Sascha and Kristin, for sharing their house (and children) with me over several days. Also to every single person who volunteered their time and energy to make the conference work. Many tasks were unglamorous, but vital, and all done with a smile. I may be labouring the point, but I really feel strongly that these conferences are so important – I recommend you attend next year – at least the accommodation is free for those with sleeping bags!