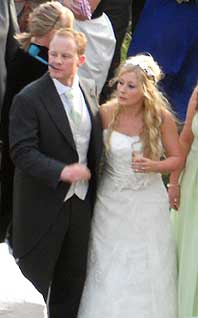 Through very unusual circumstances, I was asked to provide origami for a wedding near Liverpool. They wanted someone to wander around providing folded mementos for the guests. Normally, I’d run a mile from this sort of thing, but for reasons I won’t go into, I decided to take this engagement.

The “do” was at a fancy club on the banks of the River Dee. The sun was setting when I arrived and it was a glorious sight. I’d never been to the Wirral before and it had a clean, countrified atmosphere. As the light faded, you could clearly see the lights of Wales on the other side of the estuary.

Dressed to kill in a spotless white shirt and tie (shock! horror!) I met the beautiful bride and groom, (the latter already half cut) and presented them with a pre-folded rose and pipe respectively – he even modelled the pipe in the group photo.

For two and a half hours I plied the tables, being almost the only sober person in the room apart from the Scouse DJ, who had 5 *terabytes* of audio data on his laptop, techy fans!

Models included pecking crows, flapping birds, koalas, hearts, flowers, penguins, and the delightful “curved” variant of Yoshizawa butterfly. People were generally amazed at seeing these materialise in front of them and their responses made the evening less tiring.

I was finished by 10.30 and slipped out after managing to extract payment from a proud (and hugely intoxicated) father of the groom. So, tiring and perhaps not the sort of thing I want to do regularly, but another reminder of how appealing origami can be.