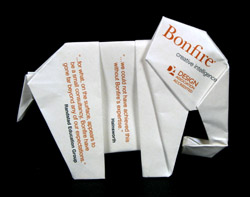 I had an email recently from a PR company (Bonfire – read their own write-up) with whom I worked in 2009, reminding me of the fun we had. The project was to fold 650 odd elephants and encase 100 of them in a block of acrylic. They had been at work on the project with another paper-folder for about a year, but decided they wanted fresh input and approached me.

The design they were using had no clearance from the Japanese creator, so I came up with an original model for them. Perhaps a little contrived (ie. not something I might have created for my own pleasure) but effective enough. This was printed onto paper so that the logo and various mottos were visible in the right places. It was important we got this right, since they were printing onto special paper that would withstand the heat of being encased in acrylic. 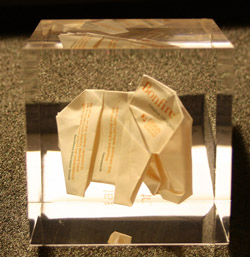 Eventually we decided everything was correct and the paper was shipped out to various folding colleagues around the country, who had offered to contribute a certain quantity. We agreed a price per unit with the client in advance. Without this, I would probably have refused the work – I find bulk folding soul-destroying, even for money 😉

I took a photo of my portion of the job (below) before carefully packing them into a trunk (geddit?) and sending off.  The client was delighted and asked for a video of the folding sequence, for which I also wrote a piece of original music.The encased ele arrived, beautifully packaged and quite a conversation piece (which of course, was the idea!).

This particular model had slightly splayed legs, and wasn’t one that I’d folded (when you’ve folded 200 odd, you get to recognise your own work) maybe some slight padding inside might have helped, but this wasn’t something we could have anticipated and it’s an issue only an experienced folder would notice. I don’t know if this is the first acrylic origami, but it’s certainly something I’d like to try again at some point.