The news of Eric’s death is painful and tragic, even if not entirely unexpected – sadly, few people survive for long with the extent of the illness he had. His last months have been lived with immense dignity, fortitude and even humour in the face of perhaps the most dreaded of diseases. I want to pay a modest tribute, but where do you start summing up a man with a spirit and talent as great as Eric had?

Many years ago I heard rumours of a French folder who was doing extraordinary things with masks. At the time it was perhaps my favourite subject, so I eagerly awaited my first sighting. When it came, I was completely bowled over. Never before had I seen such artistry and expression in origami faces. They were so far ahead of my fumbled efforts I hung my hat up and moved to a new area of creativity. I somehow felt the creator would be highly strung and reclusive.

Yet, when I first met Eric at a convention in Freising, Germany, he proved to be approachable, humble and affable. When I asked him how on earth he folded them, he indicated one of my masks and said “zis is yours? Well you already know how to make mine”. He also said he regularly used a crab of mine to introduce some folding concepts in his classes. I was overwhelmed. He once made a mask that he said was meant to be me – I intended to try and get hold of this, but never did.

I met Eric several times over the years and my love and affection for him grew every time. In fact, there were two Erics – the clown, who stole every show he appeared at with his “crazzy French umour” and the modest artist, seeking only for perfection in his own creations. He explained to me that as a guest, he felt obliged to “perform”, but that it was tiring. He was undoubtedly happier sat in a quiet corner, talking about art. Despite that, he was a natural entertainer and to sit through one of his self-deprecating classes was always a real treat. You can here some of his classic phrases on my origami fun site, where I created a Joisel Jukebox.

As for his work, it requires no eulogy from me, (although here is one) being simply outstanding, unique, expressive, majestic and inspiring. If you’re not familiar with his work, check his site out immediately. His most recent obsession was with his “Lord of the Rings” sequence. Anyone who saw them had to appreciated the amazing combination of artistry and technique he employed. Along the way, through the internet, he shared much of the creative thoughts and avenues he employed during the development. The effort it must have taken to fold these whilst recovering from chemotherapy is almost beyond belief. 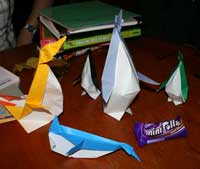 His art will live on and his memory will be come a legend. His death is especially poignant, since we learned his “Manchot” (penguin) during a mini-meeting in my house yesterday, I took pictures of our feeble efforts and was preparing to send him an email with the photo as I read the sad news.

We have lost a unique artist and an inspiring person. Farewell Eric, I’m honoured to have known you.

There is an obituary in the New York Times.