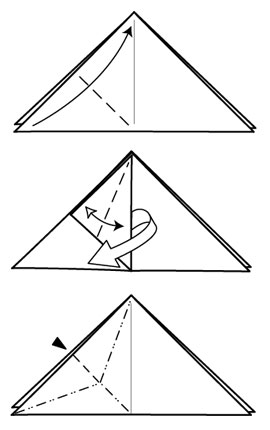 Many moons ago, Brilly (Lord Brill of Worth Hall to you) showed me this way to produce a frog base with minimal pre-creasing. It’s proved useful to me many times since then, most often when folding frog bases. I have to confess, I rarely make the trad frog, but often make the trad Iris.

Start with a waterbomb base, fold bottom left corner to the top, crease the triangular flap in half and unfold.

Hey presto, you have all the creases to petal fold that flap, producing one quarter of a frog base. OK, you need to change some of them, but I’d argue this is less stressful on the paper than making perfect pre-creases for the base.

Depending how thin the paper is and how neat you wish to make the base, you could fold up both lower corners on a given side, halving the overall workload. We all like to fold neatly, but there are times when you just need the base as fast as possible to make a quick “giveaway” fold.