POPPADOM® stands for People Out Practising Paperfolding And Dining On Masala. It’s a club for people who enjoy both origami and Indian meals, ideally, both at the same time! POPPADOM® is part of a wider organisation known as BOGS (British Origami Gourmet Society), who organise Chinese and italian evenings, amongst others! Membership is free, but a commitment to good eating and even better folding is essential.

Society rules are simple to grasp;

* Regular meetings should be held.
* Such meetings to be promoted as widely as possible.
* Paper is to be folded before, during and after the meal.
(Napkins, bus tickets and chocolate wrappers count as paper for this rule.)
* Every opportunity should be taken to involve nearby tables in paper-folding.
* Waiters should be presented with impressive designs whenever possible.
(Bartering to obtain a discount is acceptable, providing it is done discreetly)
* Ideally, meals should be preceded by extended bouts of paper-folding in a members house.
* Alcohol, for the purpose of lubricating the fingers, is to be encouraged but not obligatory.
* Members are encouraged to travel to meetings outside their immediate locality.
* When two members shall meet, the society motto will be exchanged, as follows:

1st person will say “I eat“, to which the second person responds “therefore I fold“.

Before being accepted into the ranks of POPPADOM®, you should;

Curry based songs titles are always popular at POPPADOM® meetings, where those with wit attempt to impress it upon everyone else. Here are a few to be going on with.

Jokes!
Bloke goes into an indian and says can I have a chicken tarka, the waiter said whats that, he says its like a chicken tikka but a little otter.

To fold the official symbol of POPPADOM®, you need to spend some time perfecting some advanced Curigami techniques;

The valley fold can take years to master. Put simply, you fold the paper over and flatten it. The real truth is far deeper than that.

Turning the paper over should only be attempted after several months of valley folding. Origami students of the Bronco Sinkin Curigami-Dojo™ are required to wait 3 years.

This innocent symbol can lead to hours of frustration, as novice paper-folders struggle to apply pressure in just the right place. POPPADOM is not legally responsible for injuries resulting from incorrect use of this technique.

Here’s another tricky move, best performed during August, when the planet’s are at their most propitious. Take hold of some of the paper and pull it out back to how it was before you did some folding to it.

Now you’ve practised your techniques (you have, haven’t you?). OK then , lets move on to folding the POPPADOM® symbol!

Here it is then, the official society logo. You should commit this design to heart, since you will be called up on to perform it at any POPPADOM® meeting. This is one of the rules. The design and artwork is © Bronco Sinkin 2002 – please enquire before attempting to make loads of money from this masterpiece. However, you may reproduce the diagram for educational purposes or as an aid to fertility. Or as a cure for trapped wind.

Here are some archive reports of POPPADOM meetings up & own the country.

Lal Quila Manchester
Convention organiser Brill had forewarned us that the venue was within spitting distance of Manchester’s infamous “curry mile” of Rusholme Road, so we had hihg hopes for a highly successful weekend

! On the friday night, select members of the Poppadom hierarchy ventured down the mile to select a suitable venue for the following night. With the available chioice, this was no easy task. One venue even offered us two free bottles of wine to enter their establishment. However, we persevered and decided to test out the Lal Quila. Food, service and atmosphere were all fine, so Mark Robinson applied his well-known negotiating skills to arrange a wopping discount and tables for 34 or so.

The usual list went round on Saturday and we soon had 43 people booked! I rang the Lal to check this was OK and he said “bring them all – the more the merrier”. So we were on. 6.45 we set off in a light drizzle to make the 10 minute walk. Curry Mile is an amazing place – rich in typical Asian shops – jewellery, lots of amazing fresh food, spicy takie-aways and dozens of curry emporiums. I waited at the door to ensure the last stragglers made it into the Lal. We took over an upstairs room, which we had virtually to ourselves. Five tables of about 8 scoffers were all close too each other (perhaps a little too close for the larger members with weak bladders). 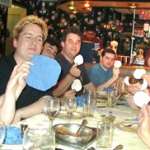 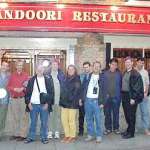 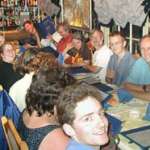 Following a succesful magazine stuffing session and an even better Sheffield mini-meeting, eight POPPADOM members arrived at the Mohul in Totley, Sheffield. The venue was recommended by founder Nick and his wife Alison, whilst not a paper-folder, still a keen devotee of Indian cuisine. 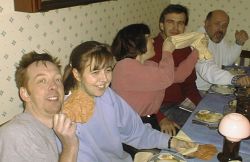 Having partaken of some delightfully light poppadoms (with the pickle tray, naturally), the group folded the society logo from a slightly too-dark brown paper. The end result looked as if it whad been cooked for a tad too long. Bahjis all round was the starter, whilst David Brill managed to frighten the younger eaters with a spectacular display of gurning. 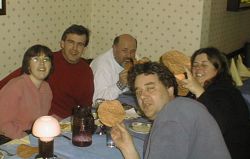 The food was excellent and arrived promptly. The waiters were a little disconcerted to see the paper popaddoms, even to the extent of bringing a dish which which to clear them away! Refreshments included Tetleys smooth ale, Kingfisher beers and a few shandys. Newly-weds Robin and Jeanette Macey revelled in the exuberant atmosphere and Robin’s naan bread took the honours as the largest this year!

It being the Saturday evening of the Spring 2003 BOS convention, a meeting of poppadom regulars was called. The nearest venue was in Beeston, so the more athletic of us walked it, whilst Mr & Mrs Macey drove in their limo. I’d booked that afternoon, so they were reasonably prepared for the 25 who made the journey. 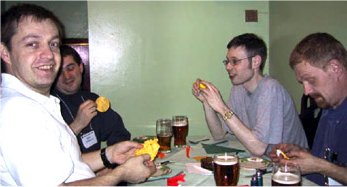 Sadly, it meant we sat at 4 separate tables and cross-table banter (not to mention the throwing of small items of food) was almost impossible. One or two new members were present, so they were taught the ritual of “folding the logo” and were 100% successful. Our one slight disappointment was that guest stars Paul Jackson, Miri Golan and Jackson-Golan junior were unable to attend, having been booked in for the regular convention fare. I’m not sure what the Indian meals are like in Israel, but I doubt there’s much folding goes on! 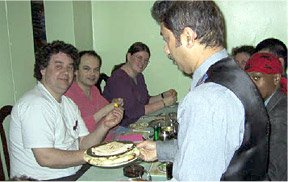 Three of the tables were served in good time, but the one I was on was unfortunately kept waiting for over an hour. Giles Towning came up with an impressive origami red chilli, which was nearly eaten by hungry folders! We whiled the time away making models and harassing the waiter every time he walked (or rather ran) past! When it came, the food was great and since our table had several veggies, we swapped meals left, right & centre.

The prospect of missing the Opera by Paulioni Jacksonioni was a terrifying one, but we managed to wolf it down in time. Sue Pope (BOS treasurer managed to flash a student discount card and obtained a discount for the entire table on grounds of the delay, so we staggered back to the convention happy and well-fed.

Maharajah Cambridge
On the saturday evening of the Autumn 2002 BOS convention, a small group of 23 intrepid souls set off into deepest Cambridge in search of a meal. Local POPPADOM member (and co-founder) Alex Bateman and his wife Jane guided us to the Maharajah.

They were delighted to see so many people all wishing to sit together at 7.30 on a Saturday night, but four people had to set on a separate table. The rest of us were at a long table. Special guest Joan Sallas from Spain (by way of Germany) had never been “for an Indian” before and was fascinated by our ways.

The food arrived quickly and tasted good, washed down with wine,the local ale and some Kingfisher Indian beer. Several origami items were attempted, including a frog, which promptly went swimming in some wine. The group folded the society logo.