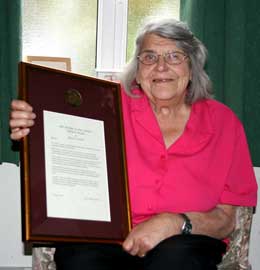 People often think the BOS Sidney French medal is bestowed only the high-profile or creative members of the society. However, anyone can be suggested as a recipient if they have contributed significantly to origami. One such is Helen Swift. Whilst you may not know her unless you attend BOS conventions, she is a perfect example of someone who has given much to origami in her own way and highly deserving of this honour.

Here are the words on her award. “The BOS is proud to award this Sidney French Medal to Helen Swift for services to origami and children’s organisations. Helen has been a member of the BOS for many years and has offered gentle encouragement to new members with her patient teaching style. She can always be relied on to help people at conventions and to make first-timers feel comfortable.

She was “Brown Owl” in her local Brownie pack for 30 years. She joined the BOS to gain knowledge and inspiration to teach origami to the girls. The models were carefully selected so they could be finished in 10 minutes or so, allowing everyone to have something to take home that they had made themselves. She also worked alongside the late Sam Evison with his work in the scout movement when he needed help with his many origami classes. She was a school secretary and classroom assistant, bringing origami to the pupils through this work. In all this work, Helen is cheerful, unassuming and humble, proving that a love of origami (and people) is at least as important as technical or creative skills. She represents the very best spirit of origami and we are delighted to recognise her contribution to origami and the BOS.”

I was equally delighted to travel to her cottage near Chester in 2009 and present the award on behalf of the society – I remember how she took my daughter under her wing at many conventions, teaching her simple models and how she always kept an eye open for anyone who looked a little shy, helping them to get involved in the activities. We were joined by her nephew David Jones and local BOS members Frank Rowlands and Joan Hughes, who relished the chance to grill me about techniques, books and lots besides.

With starry eyes, Helen told us tales of the joy she has had from both teaching origami and attending conventions. She was stunned to receive the award and typically felt she didn’t deserve it – “I thought only world-famous folders got one of these!” At 83, she is feeling the rigours of old age and may not be able to travel to future conventions, but her passion for origami remains undiminished. If you live anywhere near Chester, please get in touch and see if you can help her organise more mini-meetings. You’ll come away in awe of this amazingly positive woman.