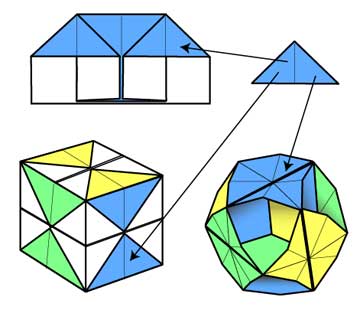 Whilst playing with the traditional house yesterday, I discovered a unit by adding a couple of extra creases to each I joined six of them into a cuboctahedron and promptly taught it (over the phone) to my mate Wayne. He said, I’ll make six and ring you back. He rang back to say he’d made the cube. “Cube?” says I? Yes, he’d joined the modules the opposite way round and formed a cube. A classic case of origami BOGOF (buy one, get one free).

Here are the possibilities discovered so far. I’ve shown where the triangular flap of the house appears on the finished modulars. I’m still playing with it and have also joined two to make a 4 compartment box. It just goes to show – never overlook the traditional models, they may well contain further undiscovered possibilities.