Tidying out a drawer recently, I came upon this cover sheet from a pack of “Sakoda” foil paper.  James included a pack of it in with a signed copy of his “Modern Origami” that he generously sent to me many years ago.  I never met him, but he was a fellow contributor to “FOLD” (an APA – amateur press alliance) I was part of in the 80s, alongside Lang, LaFosse, Lister and many other luminaries). He died in 2005 aged 84. It’s interesting for several reasons, a glimpse of marketing design in the 60s, an indication of how popular foil was at the time (enabling Rhom and Elias to produce creations of amazing complexity) and not least, what passed for “modern” origami in those times. For more biographical data about Sakoda, visit David Listers emporium. 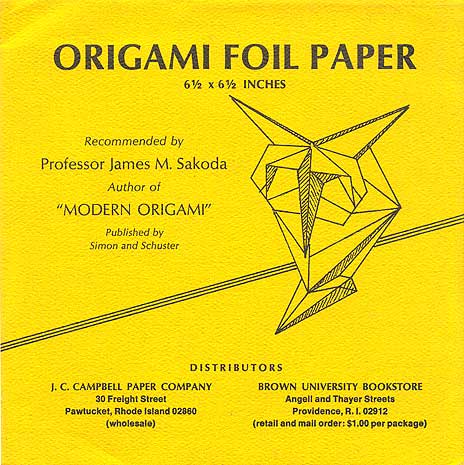