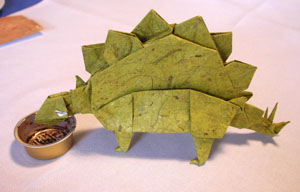 I was online once when a friend in America logged on to chat to me – “what’s happening?” he asked. I replied “I’m just about to go for a curry with John Montroll”. He was suitably impressed! John was on a week-long holiday in the UK and some of us had organised a schedule for him.

We showed him the sights, including a day trip to sample the delights of York and of course a few mini-meetings had been arranged, including one at my house. John showed himself to be a highly stimulating guest with some lesser-known talents, such as whistling (he has a five octave range) and his method for teaching perfect pitch, which I’m now working on!)

Needless to say, it was his origami we were most interested in. For many decades he has been a highly respected and prolific creator and few people don’t own at least some of his books. I’ve felt for some time that John has been slowly slipping down the list of top folders. His work has been regular and consistent, but he hasn’t embraced the “ultra complex” folds that seems to be the most popular trend these days. Consequently, whereas in the 80s he represented the height of complex folding, it may be nowadays that his style is less challenging and even a little out of fashion.

John freely admits that he is concerned with the “journey” and not the final result. He has no interest in the finessing and 3D modelling many other people apply to his work. He sees himself as the “composer”, who writes his “songs” to be enjoyed by as many people as possible. He’s always happy when “virtuosos” add the final creative touches to his models. Consistency is a double-edged sword.

On the plus side, you know what you’re getting from John – intermediate to complex models, usually animals, that are carefully and lovingly arranged to ensure “foldability” and unmistakeably represent their chosen subject. By contrast, you might argue that this doesn’t show real progression. However, he brought drafts of his next two projects and one in particular took us by surprise. I’m delighted to say that his new book (now available) shows that John has a great deal more still to offer us.

It’s dedicated to creating polyhedra, using only a single square. Throughout his career, he has rigorously observed the “one square, uncut” tenet, indeed his creative career began because he wasn’t satisfied with the two sheet models of Honda he folded as a child. He was obliged to develop a wide-range of ways to achieve the required number of points for an anatomically correct animal or insect.

He has perfected ways to create “nets” within the square, which cleverly wrap round and lock into themselves to form the solid. Impressively, the faces of the polyhedra are near maximally sized, and some even share dimensions when finished, from the same sized starting square! Needless to say, a range of ingenious techniques are used to generate the required locations and angles. I urge you all to buy in a copy!