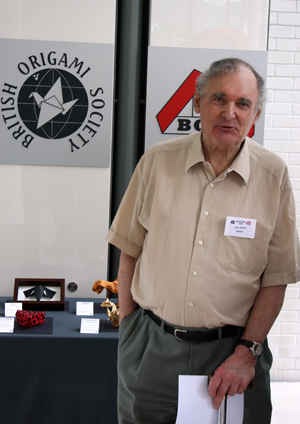 I knew of John Smith from my first days in the BOS, when he was chair of the Council. His academic work on subjects such as the (in)famous “Origami Instruction Language” were way over my head and I was aware that he had a keen and challenging intellect. However, it wasn’t until I joined the Council in the 80s that I really got to know him.

His chairing of our meetings was a superb example of the required skills, he encouraged us to have our say, then at the end would offer a concise summary of what the choices were.  I remember feeling somewhat intimidated by his thoughtful analysis of issues and (unlike myself) he seemingly wasn’t given to joking during meetings. I felt the Society to be extremely lucky to have him at the helm.

He worked hard to move both the Society and study of origami forwards and was a key factor behind the publication of COET, a collection of papers from the first International Conference on Origami in Education and Therapy in 1991. Other publications of his included: Notes on Origami and Mathematics, A Bibliography of Origami in Education and Therapy, Inspiration for Teaching Origami, Notes on the History of Origami, Simplicity & Realism in Origami and SNOW.

As the years rolled by, I grew to know him a lot better and learned that underneath his orderly and professional demeanour lurked a man with a child-like wonder at the beauty of paper-folding and a twinkle in his eye. When he was particularly impressed with a new design, he often turned to poetry (including haikus) to express his feelings, such as this, inspired by seeing Fujimoto’s Cube

We both shared a love of simple folding, which he expressed in his development of “Pureland Folding” and “Forgiving Folds” in which he hoped that the simplicity he so admired would help develop models suitable for children to learn. We also enjoyed computing, then at the start of the PC as we know it today. I bought my first “decent” computer from John, a green-screen “Apricot” with a (gasp) 20Mb hard drive, which I was utterly thrilled with.

He also contributed several essays and booklets about ideas that excited him, often bringing together origami and mathematics. Each had its own acronym such as “Curio” (Curve Induced Origami), and SNOW (Symmetric Nodal Origami World) and OIL (Origami instruction Language).  His contributions to the early days of the Society were immense and will no doubt be documented elsewhere.

I spent many happy hours with John over the years, at BOS convention, overseas conventions and especially at a tribute to Thoki Yenn in Dessau (right). I set up and maintained a website for him, called “Bits Of Smith” (now hosted by the BOS here) and was amazed at the breadth of his knowledge and expertise.

As John grew older, his acuity inevitably lessened, but his charm only grew and he was able to really “let his hair down” from time to time. His phone calls were often to discuss some finer point of theory or to point me towards a new delight he had discovered.

In more recent years, his calls were fewer and often quite emotional, his mobility was on the wane and eventually he moved to a care home. By all accounts though, he was still alert and engaged with his fellow residents, although his physical health didn’t allow him to travel to the BOS 50th, despite our efforts to make it happen. I was delighted that he got to see the first copy of my tribute to David Lister, since he had (gently) nagged me for several years to produce it!

John was a towering giant of origami academia and his thought-provoking work will continue to influence future students of the art.