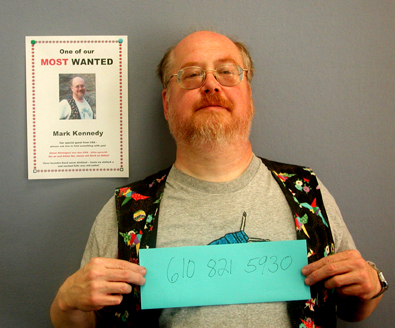 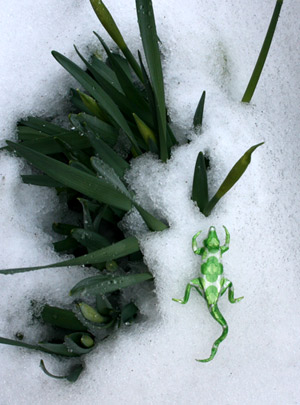 I can’t recall how I first connected with Mark, but it may well be through a column called “Airmail” that I wrote for the BOmag in the 80s. We became better acquainted when he invited me to join a private origami publication called “FOLD”, where along with the likes of David Lister, Robert Lang, Michael LaFosse, James Sakoda and many others, a group of 15 or so people exchanged bi-monthly columns where we talked about our lives and origami. Being fairly poor at the time, I said that I would be unable to post large packets to America on a regular basis, so he suggested a way round it would be to posting my contribution to Mark, who would then make 20 photocopies of my 10 or sp page articles. to send to the editor for collating along with his own scribings.

I rapidly discovered that Mark not only had a highly developed sense of humour (and a love of drinking songs) but that he was a generous friend. He would regularly send me copies of John Montroll’s latest books (and had John sign them) as well as any number of books, magazines and gifts. 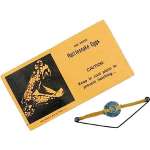 One package from him arrived on a Saturday morning when I was still in bed and I opened it eagerly. Inside was a small brown envelope marked “Rattlesnake eggs store below 5 degrees to prevent hatching”. I gingerly opened the package and nearly wet myself when it jumped in my hands and made a loud rattling noise. It was, of course, just a rubber-band powered noise maker, the type of toy Mark loved. He must have spent a small fortune in the discount shops buying up all manner of tricks & games to give away and to amuse people. His house was a treasure trove of discounted items – like me, he felt if something was a bargain, he should buy it, regardless of whether there was an immediate need for it 😉

Mark was not a prolific creator, but he did both create and adapt numerous models. He often made diagrams of others’ work and did his best to promote models he liked. At some point, he began to create badges / broaches of models folded from foil paper that he hand-decorated and lacquered for strength before mounting a pin on the back. These eye-catching gifts were in great demand and he would always bring a massive collection of them when he visited conventions overseas. Whilst he sold a few, the vast majority, I suspect, were given away – I still have dozens.

When I was invited as the guest at an OUSA convention, I had intended to travel alone (due to lack of funds) but Mark offered to cover the costs so that my wife could accompany me. He insisted I kept this amazing act of generosity a secret, but I feel it’s right to share now to give an indication of the kind of man he was. After the convention, Ali and I spent a few blissful days at his house during his traditional “Fold & Feed” weekend. As well as seeing fireflies (for the first time!) we watched amazed as Mark and Arlene hosted an event almost the size of a BOS convention in their back garden! 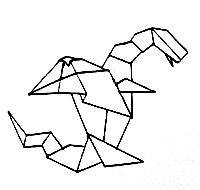 In the movies, American houses often seem to have huge basements and Mark had turned his into an origami man-cave. The largest room had wall-to-wall bookshelves chock-full of origami magazines and books, as well as enough paper to stock a medium sized shop. The rest of the space was full of tables covered with more paper & books yet to be filed. Sandwiched in the corner was a desk with a computer where Mark made contact with the outside world via email or skype. Another basement room was given over to relaxation, with music system and settee, but this had turned into a drying room for his pin badges, with hundreds neatly lined up awaiting the next convention. The room next to that was the assembly room, where the models were folded, attached to the pin and lacquered, again, many hundreds were in preparation at any given time. I cannot begin to guess how many thousands of these little gems he made during his lifetime, but they have spread around the world and are universally treasured.

Mark loved to travel and visited many international conventions where his huge personality and generous nature endeared him to countless folders. We spent some quality time together when he stayed with me for a few days after the BOS 30th Anniversary in York, 1997. From time to time he was a “special guest”, such as Brannenburg, Germany in 2005 (he was easy to identify as he sported a bright orange high-visibility jacket) and Mennorode, Holland in 2009. Invariably, he was accompanied by his wife Arlene.

One remarkable aspect of Mark’s personality was his positive approach. I cannot remember him losing his temper or being disrespectfully critical of anyone. He had a great heart and liked to look on the brighter side of life. Despite this, he had some wry observations from time to time on the internal politics of OUSA. 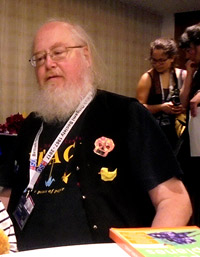 In his later years, Mark’s beard grew longer and turned white, resembling the classic image of Santa Claus. In many ways, this was apt, since he had a huge love for children and an endless stream of ways to amuse and delight them. Whether it was a squeaker that he operated while pressing their noses, or toys he had bought in bulk from a discount store, or origami models folded to order, he was never at a loss. He also had a bottomless well of jokes and excruciating puns to share. You can hear a few of them here

He attended the BOS 50th Anniversary convention in September 2017 and even at that point was unaware of the illness that was quickly to take him from us. It’s safe to say he squeezed a lot more into his 68 years on the planet than most people ever do. He found a final release from severe pain in the arms of his beloved wife Arlene and our thoughts go out to her and the rest of the family.