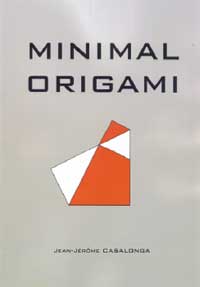 Those of us who were folding in the 80s may remember Jean-Jerome, the self-confessed “Mad Corsican”. I still have the full set of issues of the Corsican Origami Society magazine (total society membership 8). It was believed that JJ was struck down by “other interests” and for time out of mind he lay hidden in the mists of time. However, for some months there have been dark whispers from out of the West that he was gathering models to himself for a return and here it is, my precious!

Minimal origami is a concept suggested by John Smith, who provides a couple of pages explaining the whys & wherefores. JJ offers the following rule; “You cannot use more than four folds”. He also suggests you need a lot of imagination and a small dose of humour”. This is MO in a nutshell – it can be like seeing faces in the clouds – a figure may elude you for some time, but once you “get it”, it’s clear as crystal. I shan’t delve deeply into the relative merits of MO, you either get it or you don’t.

The book is divided into sections; 4, 3, 2, 1 then zero fold creations, letters of the alphabet and flags. Some subjects require a bit more imagination than others! As you can imagine, simple models are likely to be created independently by several designers and I spotted 2 or 3 credited to different people from who I’d expected. Rating the designs is entirely a matter of personal taste, but “man with bouquet” by Ryan MacDonell was new (to me) and very impressive, worthy to feature alongside Paula’s “Santa”, which graces the cover.

The book is laced throughout with large dollops of Corsican humour, yet the basic subject is treated seriously and discussed sensibly. Brilly’s forward, using a mere two words, fits the theme nicely. If I had to be picky, the lack of contents page and page numbers is slightly irksome and the layout haphazard. However, as the first comprehensive collection of MO, JJ is to be congratulated – his time in the origami wilderness has not been wasted.