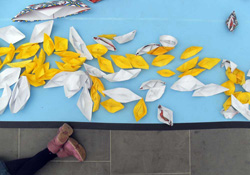 Just back from two highly eventful days in Greenwich, London, working for the National Maritime Museum. The Museum itself is a highly impressive building built in 1807 and surrounded by naval buildings of all kind, including one housing the Cutty Sark, unfortunately still being restored and under wraps.

An artist called Yinka Shonibare had created a giant model of Nelson’s boat “Victory” inside a bottle, which seemed a good enough reason for the museum to recreate the Battle of Trafalgar using origami boats!

The upstairs gallery was a large tiled area, where we taped down large strips of blue paper to form the sea. A quickly drawn compass to indicate which way the wind was blowing and we were set for action. 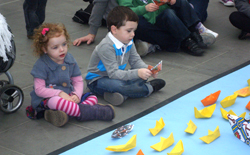 Two tables were set up, where visitors had the choice of folding themselves using some printed instructions, folding with myself or helpers Sarah and Sonia, or having us fold it for them (if they were just too young). It didn’t take long for hundreds of boats to take shape; patterned for the English fleet and white or yellow ones for the French & Spanish.

One visitor was having a good “pop” at the Spanish, not realising they were stood next to some visitors from Spain. I managed to calm things down by saying hello in my best fluent (6 classes so far) Spanish and then asking for a second class return ticket to Bercelona. 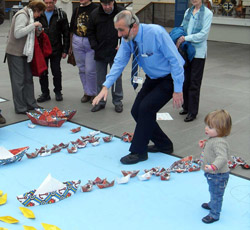 The double-sided pattern for the ship was prepared by Shonibare but unfortunately, only worked one way – folding with the wrong side upwards produced an all white boat! We also had some single-side A2 sheets, which I laminated together for some larger ships.

Twice during each day, a recreation of the battle was led by expert David, who enthusiastically led use through the fascinating story of the battle, which led to Nelson’s death, shot by a sniper.

What was extraordinary was the way in which visitors were delighted to sit on the stone floor and fold, both young and old, forming something akin to Greenham Common. They really “got it” and for hours, the floor was awash with folding.

As is always the case, I had numerous requests for subjects other than a simple boat; a whale, box, snake, crane, penguin, oil tanker(!) and a dragon. The latter was Robert Neal’s classic dragon, which takes five minutes or so. I handed it over and he stood there impassively. I asked what else he wanted “I need another dragon for my brother”….

All in all, a highly successful weekend, where origami was used to enhance an educational talk and provided entertainment and stimulation for many people. My thanks to Louisa and all at the National Maritime Museum – I hope we can work together again in the future.