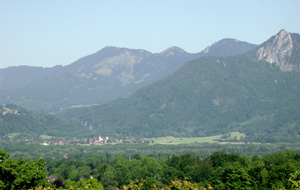 Having attended and enjoyed Origami Deutschland conventions in the past, the prospect of spending a weekend folding in the foothills of the Alps was too good to pass up. Ali and I flew into Munich, to be collected by the OD president herself, Andrea Thanner. She kindly drove us the 30 miles or so to Brannenburg, stopping off for lunch with her predecessor, Ruth Schumann, along with her husband, parents and delightful baby!

The venue itself is on the outskirts of an idyllic Bavarian village, full of Hansel & Gretel cottages, nestling in the foothills of the Alps. The venue was half-way up the hillside, with stunning views in all directions. There were many teaching rooms, a bar, a charming timbered dining room and spacious rooms, each with their own balcony. 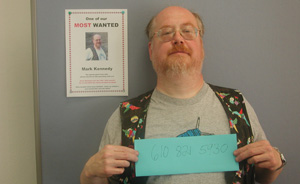 Special guests for the weekend were the Italian Roberto Gretter and American Mark Kennedy, who both taught tirelessly for most of the weekend. Mark, as ever, handed out huge quantities of gifts, especially his famous laquered pin badges. Roberto is a creator of much talent, whose designs require some concentration to complete properly. Due to the constant flow of beer, glorious sunshine and amazing views, I have to confess that concentration was somewhat lacking. Sorry Roberto! 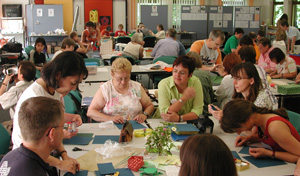 There was a free-form approach to the schedule – you entered your name and model on a post-it note, then found an empty slot in which to place it! However, everyone seemed happy with this. Many informal sessions started up, using the many tables set in the courtyard. The meals were elaborate buffets, with a wide variety available to suit all tastes – how I wish the BOS venues could offer this kind of selection, but it’s not the British way.

On Saturday evening there were several hours of fun and games, but we chose to watch the sun slowly set over the mountains, with Jens, Barbara and the delightful young Nikki Grabant. As a city-dweller, I’m not used to seeing the skies clearly and was astounded to see how many satellites were visible to the naked eye. 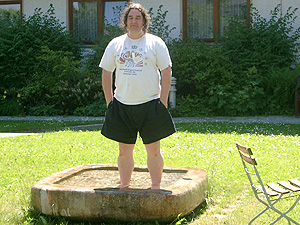 I missed the AGM because my German isn’t enough to follow serious meetings, and this one was more serious than most. Like most origami societies, Origami Deutschland is kept together by a small and highly dedicated group of volunteers, many of whom give up their free time during the convention to ensure everyone else has a good time. I urge all members to consider if they can offer help of any kind to the committee and to make their own contribution to the running of the society.

The exhibition tables were overflowing with goodies and downstairs, the gorgeous Silke Schroeder had her usual amazing selection of books and paper, including 3 new Kasahara books! On Sunday afternoon, the more energetic went for a stroll up the mountainside, your well stuffed BOS editor not being one of them. Surprisingly Ali and I were the only Brits present, John Cunliffe sadly pulling out due to ill health. All I can say is, you missed an amazing weekend. Afterwards, Mark, Arlene and ourselves were shown amazing hospitality by Paulo, Silke, Susanne and Oliver, who helped the days pass beautifully. Thanks to all the organisers for a wonderful weekend. Having a few days left of our holidays, we nipped up to Freising and as ever, had a fabulous time with Salz und Pfeffer