Origami and the art of satire 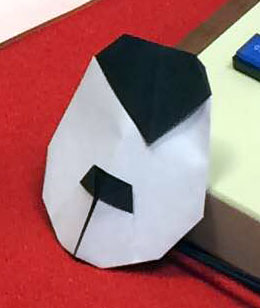 Over the years, there have been precious few models design as satirical comments on the world. Why this should be so is perhaps a comment on the reluctance of most people to “get involved with politics”, but it’s a shame, Most serious art-forms have embraced satire for thousands of years.

Of existing examples, Eric Kenneway once made a design showing how Lyndon B Johnson turned into an bomb. He also made a book of folded faces, including highly successful models of Stalin, Nixon, Hitler and Fidel Castro. His natural designs skills and unique vision of origami shine out. Tony O’Hare once made caricatures of Margaret Thatcher and Ronald Reagan (diagrams here). Daniela Carboni made a representation of Ku Klux Klan members. David Mitchell reminds me of The Mad Fold-In – a feature found on the inside back cover of most Mad magazines since 1964, written and drawn by Al Jaffee. They formed an image, which when pleated inwards formed a satirical comment on people or life.

Juan Gimeno has details of an interesting fold for the of King Louis XVIIIi of France. The Pamphlet was published by J. B. Verzy, around 1814, possibly when he was presented as heir to the French Crown after the final defeat of Napoleon.

David Medina also reminded me of a folding puzzle from the 40’s that turned four pigs into Hitler’s face. There was also a folding toy satirising President Nixon. I can’t think of many others that fit the category. I’ve tried to reflect politics in some of my designs, including the Berlin Wall, refugees and a fold celebrating the Obama victory.

So when the US Presidential election kicked off, I was delighted to see an origami version of the Clinton “H” logo, created by several people following a challenge begun by Meenakshi Mukerji. Several people responded, including Michel himself,  Jason Ku, Leong Cheng Chit, Francis Ow and Robert Lang. Mon ami Michel Grand told me of this challenge while we were at a Folding Didactics conference in Badalona and after a few minutes of crumpling paper, I came up with a version using a 7×7 grid. The challenge wasn’t particularly the shape, which is relatively easy to achieve, but to use the paper efficiently. I guess mine will be similar to Robert Lang’s version. This led me to thinking, what about some Trump origami?

Trying to caricature people with paper isn’t easy (which may be why so few designs exist) but I set to and after some experimentation, came up with a design. It seemed to good to be true that when I turned it over, the letter T appeared! The trick was to find something that caricatured, but wasn’t *obviously* offensive, since I wanted the brain-dead Trump supporters to latch on to it and spread the word for me. However, the nose is probably too phallic to get away with this. I haven’t made diagrams, but could do if there was a demand.

I apolgise to any Republican friends I may unknowingly have, but words cannot truly express the contempt I feel for Trump. If I was a Yank, Clinton would be my choice (in the absence of Bernie Sanders). I feel deep sorrow for all those Americans who have lost all faith in the political system, but if you don’t vote, you’re just burying your head in the sand.  David Sedaris summed up the choice nicely when he said “you go into a restaurant. The waiter offers you a piece of mouldy old cheese or some sh*t with razor blades in it Which do you choose?”. We have the same issues in the UK and the result was the catastrophic, mindless and fraudulent Brexit campaign, that led the UK to probably the worst decision we have made in several hundred years.

So, do you know of any other political caricatures?