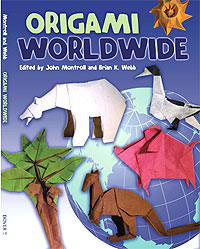 Origami Worldwide is a collection of models created by origami designers from around the world that John has met on his many travels. Countries represented include Australia, Bolivia, Chile, China, Canada, France, Hungary, India, Italy, Japan, South Africa, Switzerland, The Netherlands, United Kingdom, Uruguay, USA, and Vietnam.

It isn’t clear what each of the editors did, but the diagrams are very much up to the required standard, using shades of red and grey. They have been created based on original diagrams by the requisite creators. There are basic symbols, otherwise you’re straight into folding at page ten. Whilst the models vary in complexity, it’s safe to say you need to have basic folding skills in order to tackle this book. Subjects are mostly birds and animals, with a few other inanimate subjects included. You can see illustrations of all contents on John’s website

In effect, you’re getting an up-market convention pack with a glossy photographic cover (in contrast to Montroll’s “classic” cover style of drawn artwork). If you’re after quality folding material, clearly illustrated, this will be your cup of tea.

The cost is excellent value at around $10 in the States, or a more expensive £13.50 ($23) in the UK, so my advice is to buy it whilst on holiday in America. It’s shameful how we in England get ripped off by exchange rates, but there’s little to be done about it.