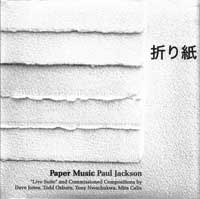 This recording really began in 1978, when Paul Jackson first conceived the idea of a “paper concerto”. He’s worked on it and performed is many times since and finally had a chance to “get it down on tape” properly thanks to the bottomless wallet of red Bull. They put him in a hi-tech recording studio with engineers to help and produced the first track on this CD, “Paper Music”.

Clocking in at over 11 minutes, the piece is in three sections which could loosely be categorised as ”wobble boards”, “bangers” and “tears/rustles”. However, that’s just using terms a paper-folder would understand. The music should ideally be listened to as that, music, and not a novelty item. However, even to a musician like myself, well-versed in experimental and improvised music, it’s a diffi cult piece to appreciate!

Various other musicians were commissioned to produce pieces for the CD, including “Maddslinky” (Dave Jones) who uses paper samples triggered as direct replacements for a drum kit, with paper samples coming in at various points as percussive highlights. Like most of these “songs”, the lack of pitch-based content means there are no “tunes” as such, so we won’t be hearing it at the Ibiza beach scene.

Todd Osbourne follows similar lines and you can’t help hoping for some more sonic interest. Nwachukwa is perhaps the least inspired of the “beat box” pieces. Mira Calix produced the final offering and was the only “name” that I was familiar with, through her amazing work for the Warp label. She has produced a far more ambient piece, combining pitch-shifted tears with more standard samples. There is a pleasing harmonic content, induced by applying various electronic effects on the computer.

Truth be told, the Calix track is one I will return to, the others probably not. However, Jackson is to be congratulated on a fascinating project, beautifully produced and packaged. It won’t be a massive seller (unless the well established “weird music scene” picks up on it!) but it won’t be the first time he has taken on the establishment and won!

You can hear some of my paper-based music elsewhere on this blog.