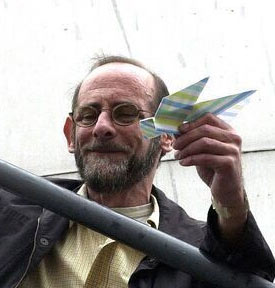 René (1946-2007) was a Brazilian born in Rio de Janeiro, who started “Origami München” in 1989 along with his partner Jan Spütz. This society, (within 15 km of Origami Deutschland!)  made its mark with regional meetings and public events, such as paper aeroplane competitions.

They even held a demonstration for Queen Beatrix and Prince Claus of the Netherlands. In 1991 he attended COET and presented the paper “new technical possibilities for demonstrating the folding process into work with blind people.”

The society was disbanded in 2002, but Jan and René continued to work professionally on their own. As well as numerous events, they wrote several origami books, including €urogami, Verzaubertes Papier, Das große Origamibuch, Fantasievolle Geschenkverpackungen selber falten, Geschenkverpackungen aus Papier, Origami Faltspaß für Kinder and Papierflieger.

In the early 1990s, I was invited by René to be the guest at an OM convention. This was not only my first such invitation, but the first time I had travelled outside the UK – I was looked after superbly and encouraged by René, even made an appearance on German TV.

René was quite a small man, very quietly-spoken and not easily noticed in a crowd, but when you talked with him you were struck by his intensity and he gave much of his life to spreading the origami word. He was an active creator, who had a clean, geometric style to his creations.

I post this obituary in the hope that we remember those friends we won’t meet again.