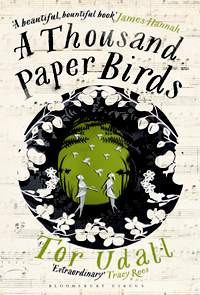 On the surface, this book (Udall’s debut) is about a man called Jonah, trying to come to terms with his grief following the sudden death of his wife. He meets several characters though his time in Kew Gardens, one of whom addresses her own problems through the medium of origami. Whilst a main theme of the book is sadness and loss, but it also shows how the human spirit can rise to find happiness again. The reader is taken on an extraordinary journey and like all good books, things are not as they initially seem.

This is the first novel I have read that integrates origami into the story so effectively and Udall has clearly made a serious study of the subject. On her website, the page of “inspiration” is a montage of images, which include many beautiful models, including those of Robert Lang and Seb Limet. Origami references are scattered throughout the book, even including a quote from Yoshizawa. One chapter includes the building of a “Memory Tree” where people fold cranes and write down things they have lost or found and hang them from a tree.

Peter Engel is acknowledged in the credits for his book “Origami from Angelfish to Zen” as is the classic Hokusai woodprint “A magician turns sheets of paper into birds”, which one of the characters has as a tattoo on her arm. However it’s clear, at least to an origami reader, that Udall has done far more than simply insert references, she understands that folding paper can be a spiritual journey. For example:

“She watches the movement of her hands across the paper, wondering if the real magic of origami is in the doing rather than the end product.”

“Origami has shown her that nothing is set in stone. A bird can be refolded into a boat, a fish, a kimono or any other extravagant vision. At other times it aches to return to its original folds. The paper begins to fray. It tires, it rebels.”

To be clear, this isn’t an origami book, it’s an enchanting story of loss and rebirth. However, if (like me) you see origami as far more than a recreational novelty, you’ll be delighted to see how sensitively our art has been woven into a story.