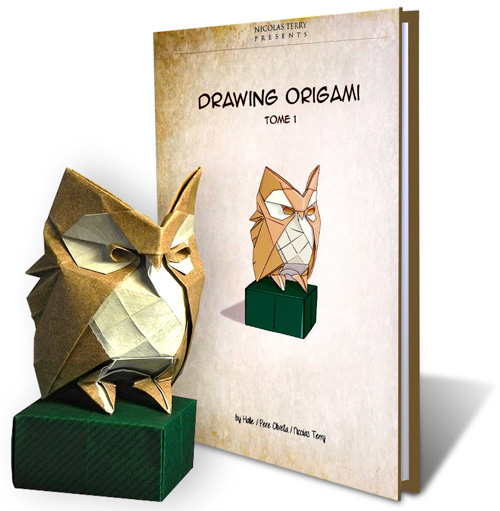 A wonderful present arrived shortly before Christmas, a copy of the book by Halle / Pere Olivella / Nicolas Terry (a.k.a. the 3 Stooges). Terry has already established a deserved reputation as a publisher of the highest quality, producing a seemingly endless supply of new material for folders around the world through his company (origamishop.com).

Written in French, the introductory section is full of humour and useful information about the production team and various folding techniques. The “prologue” was supplied by myself and they didn’t change a single word, which was brave! The text within the diagrams is in English, a sensible decision considering the world-ode appeal of this book.

Across the 210 pages are presented 36 models ranging from simple to complex level, designers are drawn from around the world and represent the new generation of designers, sch as Sebastien Limet, Nguyen Ngoc Vu, Jozsef Zsebe, Maiara Sinaskaya, Gauchepapier, as well as more established folders such as Robert Lang, Roman Diaz, Halle and Quentin Trollip.

What strikes you immediately, looking at the gallery / index, is the artistic sensibility that has permeated through origami over recent years – almost all the models are 3D to some extent, and display a refinement of technique and touch that used to be quite rare. Clearly, this reflects the good tastes of the compilers, who know a good design and creative talent when they see it.

Then you get to the diagrams, but what diagrams! Halle (a.k.a. Carlos González Santamaría) has for some time been the most exciting diagrammer on the planet, to my eyes. His work is computer drawn, using steps folded by Olivella as the basis for delightfully three-dimensional, witty and eye-catching representations of the folding sequence. Every single step is lovingly created to include subtle shadows that really give the drawings some life. I cannot imagine the time it takes to draw these and I cannot praise Halle enough. As I diagrammer myself, I’m always looking for new refinements to improve my work, but the bar set by Halle is several metres above my best.

I have found it impossible to pick out highlights, the diagrams encourage you to get the best out of every model and with practise, you can hope to match the standards of the photographed examples.

At €34 it’s good value, plus you can get a pdf version as well for a mere 2 euros. A thick, hardback book is always going to attract depressing postage costs, but you should try and get a copy of this book if you can. Not only is it well worth it, but you are helping to further the work of the publisher, who deserves the fullest support of the origami world.