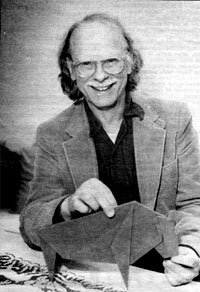 Sam Randlett has become an almost mythical figure in the world of origami over the years.  Born in 1930 he wrote The Art of Origami at the age of 30. His first wife Jean illustrated the book and (in 1963) the other half of this classic pair, The Best of Origami.

Apart from these two seminal books, Randlett’s most significant contribution to origami was a collaboration with  Robert Harbin to produce a comprehensive system of symbols and terminology (including the preliminary fold, waterbomb base, blintz base, fish base, bird base and frog base) which are still the de-facto set today. These were used in his books (which every serious paper-folder should have in their collection, IMHO) and in almost all Wstern books since then. He edited the origami newsletter called The Flapping Bird from 1969 to 1976, but since then has kept a remarkably low profile in the ori-world. 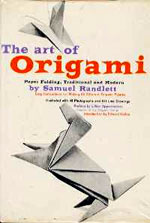 I’ve had a couple of brief (written) encounters with him over the years, asking for permission to publish his work. He once sent me an unpublished Jack Skillman design for use in a BOS convention pack (“Table salt” in the Autumn 1986 collection). He explained that he’d found this model in Skillman’s apartment shortly after his death. This wouldn’t mean much to today’s young turks, but I was seriously impressed – it was like a window into the early days of origami.

Biographical detail is hard to find, but it appears Sam still teaches piano (music being the other love of his life). There’s a fascinating article written by Jean-Claude Lejeune.

Here’s a list of his published models extracted from the wonderful origami database.