French folder Sebastien Curvers took his life at the end of November 2006. It was not widely known that he suffered from a degenerative illness.

Nicolas Terry said; “Seb was a key person in my life of origami. He offered essential help with the creation of my website. He was also the proof-reader of my diagrams.

Anyone who saw his website (Nic Terry has kept an archive copy https://seborigami.free.fr/ – thanks Gilad) could see the passion he had for paper-folding and his novel choice of subjects, such as the “World Turtle” from the Pratchett Discworld novels. 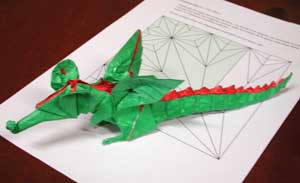 I also met him at the Rencontres de Mai in 2004 and was impressed by this studious, quiet, intelligent folder. We discussed his adaptation of Joisel’s Rat into a dragon and many other things.

I post this obituary in the hope that we remember those friends we won’t meet again.