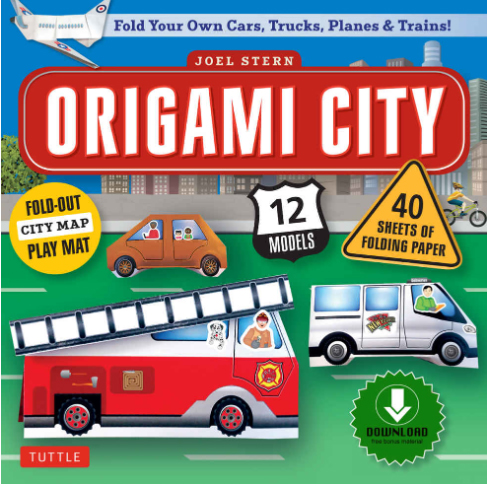 By Joel Stern. Kids will love folding their own cars, trucks, trains and planes with this easy origami kit! From the author of bestselling My First Origami Kit, this awesome kit contains 40 colorful origami papers for exciting models like trains, cars, firetrucks, helicopters, motorcycles and delivery vans, trees and houses. Also included are bonus instructions for an origami tower and a bridge! It also has over 130 stickers and a large fold-out city map to play with the models on. Kids will spend many hours of fun playing in the city, and it’s a great way for them to experience the tactile joys of paper folding while fueling their imaginations!

Beginning origami folders can create their own world with the exciting origami models and stickers in this origami-for-kids kit, including:

Each colorful model comes with simple instructions and matching double-sided origami papers that can be easily folded in a few seconds. Once the models are folded, kids add finishing touches to their work with the colorful stickers provided.