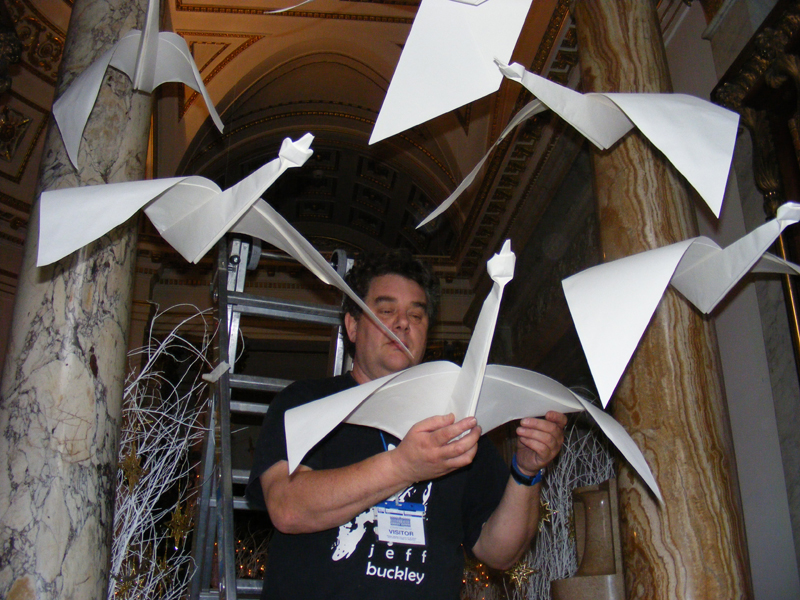 As a professional paper-folder, I sometimes get to fold where no man (or woman) has folded before. In late October, this turned out to be Chatsworth House, the home of the Duke and Duchess of Devonshire! I had been approached during summer to provide eleven large flying swans, to tie in with exhibits based on stories by Hans Christian Anderson. These were to be part of the decoration of several state rooms in the house during Christmas.

A quick trawl of both the web and my book collection revealed that there were no existing origami swans “in flight”. I called my origami mentor Wayne Brown and we spent a happy few hours trying to capture the elegant profile required. Fairly quickly we decided an isosceles triangle was the most efficient format and Wayne came up with a superb solution, which I then simplified!

The next problem was the paper. Even though the design was highly efficient, a large sheet was required to produce the desired wingspan of two and a half feet. The wings were essentially a single layer of paper, so wet-folding was required to give them some shape and rigidity. My preferred paper for this has long been Canson Mi-Teintes, but the largest sheet I could get hold of was far too small, so I arranged from some to be imported from France (the home of Canson) and delivered direct. 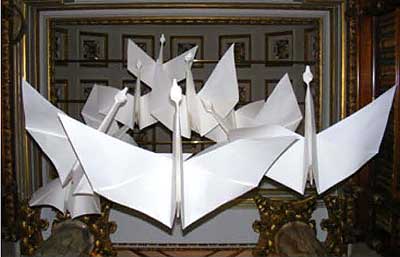 These measured around three foot by four foot. Even with paper this large, I still had to cut out to triangles from each sheet and join them to form an even larger triangle. Masking tape did this job and was hidden inside the finished fold.

Wayne and I made a variety of sizes, intending to enhance the illusion of perspective as the swans flew away. We custom-made some small hooks using paper clips and taped these inside the body to provide two mounting points. Some very fine fishing wire would provide the means of suspension – Chatsworth had promised three rods spanning the area we were to fill. I recruited Darren Rodgers for the installation, being tall and with no fear of heights, he was invaluable! We were passed though security and led along darkened stone corridors, (designed so the servants and masters never met) until a secret door led out to the magnificent state dining room.

We were to hang our swans by the entrance to the room, between two marble columns and shelves of book over 400 years old. A ladder was provided and thankfully it was a tall one, since the rods were over 20 feet in the air! The lack of good lighting, hair-width line and failing eyesight caused immense problems – we literally couldn’t see the wire to tie knots with! Other problems soon became apparent – the more swans we put in place, the more difficult it was to add news ones, since the ladder kept catching wires and causing “dying swans” to cascade to the floor.

In the end, it took us nearly 4 hours to hang eleven swans. We then decided too many wings were a-drooping, so added some “garden wire” support to the wings, allowing us to provide some uplift. The job was completed with visitors passing by making complimentary comments. With hindsight we’d have done the whole thing differently, but it was certainly eye-catching.