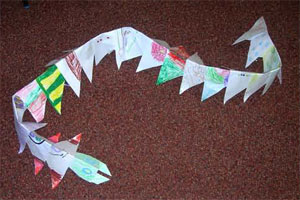 For the last couple of years I’ve been working for a company called Rotherham Open Minds Theatre Company. Formed by two disillusioned teachers, they began to take their own drama classes into schools. On success, they expanded the range of classes they offered to include subjects like street dancing and African drumming. Seeing their advert for free-lance artists, I thought I’d give it a go. I had to do a micro teaching session at the interview and managed to secure a place with them. I found out later that one of the directors, checking through the applicants, saw the word “origami” and promptly short-listed me!

So, it was back to the “coal face” of teaching origami, after many years of sitting at a desk, illustrating books. I had to get a CRB check, which came back clean, proving that excruciating puns and crimes against origami good taste don’t count.  Many of us have taught a model one to one, but there are few more humbling experiences than teaching a group of eight year olds! Where adults will overlook mistakes or poor explanations, children will say “I don’t get it”! I ask questions to enhance the learning experience, such as “what do you call it when something looks the same on both sides”, when some tiny cherub will say “Lateral symmetry, of course!” Never, ever, underestimate your students…

Working with children is an immensely rewarding experience – you are constantly reminded that they are just little adults. One child told another to “shut up”, the response was “that’s inappropriate language!” They respond with enthusiasm and excitement – I’m constantly reminded of the pure joy origami was for me before I became a cynical, jaded, “expert”. Your linguistic skills and assumptions are constantly challenged – I asked them to tuck a corner under a layer, but one child looked completely puzzled. I rephrased it before they admitted they didn’t know what a “layer” was. My teaching is coming on in leaps and bounds as I learn these small but important lessons.

I’ve built up a repertoire of teachable designs, including many from A4, that being a format easily available in skools. I bring diagrams, partly for follow-up folding sessions, but also because there’s nothing worse than forgetting the sequence – this happens more often as you get older! I’ve also learned that younger students get as much pleasure from decorating a model as from folding it. Crayons have become an integral part of my tool box. It may be that they feel more “ownership” after decorating it, but it means you need fewer models for a given time. I usually do 90 minute classes and we get though between three and five models. 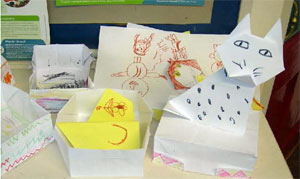 One of the many benefits is that your success rate with adults will undoubtedly go up. You learn the best words to use, the way to hold the paper, which steps may need more careful explanation and many more subtle but useful tips. You also get lots of creative ideas, since many children will say “it looks like ..” and you think “Yes! Good point!” and file the idea away for the next time you teach the model.

Some of the classes are repeated over 6/8 weeks, meaning I have to prepare lesson plans, always a good idea but often overlooked.  They all fill in a “learner evaluation” form I devised and some comments are priceless. I urge you all to give it a try sometime!