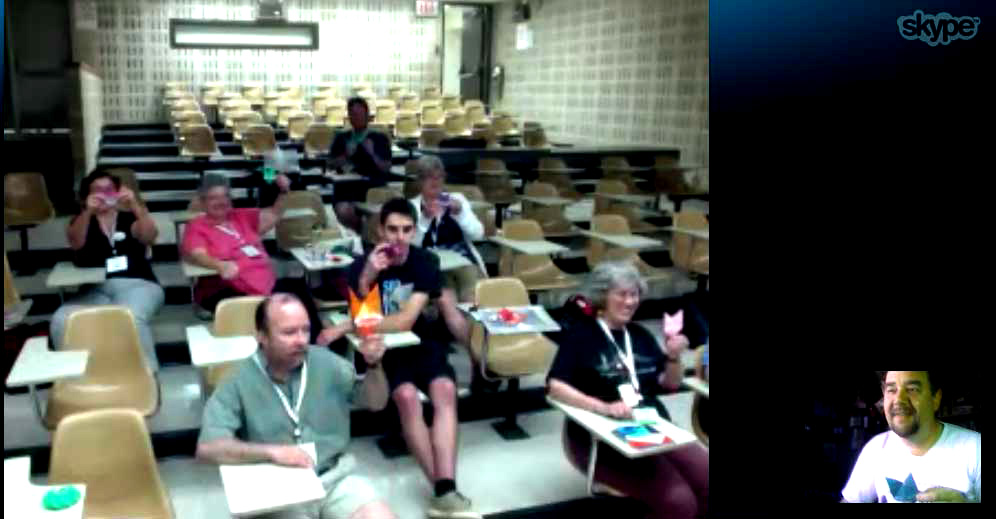 Today I taught a class live to the Origami USA convention in New York!

As their first ever live webcast teaching session, things went really well from my perspective, a “big up” for Marcio who prepared and tested the technology. Clearly, OUSA can now invite any folder in the world to their convention, at zero cost!I’ll certainly be passing this experience on to the BOS.

The webcast we had arranged was scheduled for an hour later than I expected (mixups in time differences) and it wouldn’t let me log in, so we reverted to good old skype, which was fine – I could both hear and see everyone. My webcam is a really cheap model, so the colours and sharpness may have been lacking, I’ll invest in a higher-res model if I do this again.

The class itself was scheduled for 4.15 although I was expecting it at 4 – there was just the one enthusiastic lady there, but we chatted amiably for 15 mins and several others joined us. Great to see Tom Hull pop by to say hello, but I fear the class was a bit advanced for him 😉

meone’s suggestion of “Rabid Dog” – I’ll rename it immediately!) and a “Dodecagon Dissection” unit from a work-in-progress book to be called “Geometric Origami”. The audience were much more polite than a typical British group, I suspect my Brit humour didn’t *quite* come across as intended, but everyone seemed to finish the models, which was a great relief.

The class departed and Marcio logged off at the end, but somehow a small video screen remained on my screen and a young boy I hadn’t seen before came into view, waving. I think his name was Thomas, from Viginia, so we spoke a little – see the image top right.!