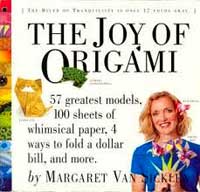 I could be wrong, but this appears to be a collection of models already published in the series of calendars that Van Sicklen has produced for the same company. As such, you know what to expect – a mixture of traditional original designs ranging from simple to low-intermediate. Some are credited, others frustratingly not – such as Kasahara’s Dove (here “Urban Bird”) and Keiji Kitamura’s wonderful cat. Many are also re-titled; the trad “junk” becomes “the Ship of 1000 Cranes”.

Other designs have titles such as  “the Rabbit of Wisdom” and “Thirsty Bird at the River of Tranquility”. Who say there are no hippies left? You also get 100 sheets of “whimsical” paper bound into the book. Sadly, the paper is glossy and covered with inappropriate and garish patterns. Quite how the spine will survive when half the contents have been pulled out is another question.

You have to admire the authors love of her subject and the book is bright and cheerful. I dislike the cutesy touches, but the book is presumably aimed at younger Americans and not grumpy old hacks like me. A slight shame about the variable credits and there is no information about OUSA. Probably not a book for any serious folder.