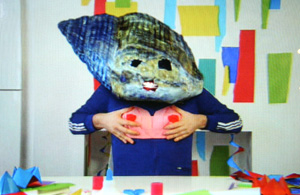 Noel Fielding is well known amongst the younger generations as half of the “Mighty Boosh” comedy show. More recently, he seems to have gone solo with “Noel Fielding’s Luxury Comedy”, described as “Psychedelic character-based comedy show half filmed and half animated, with music provided by Kasabian’s Sergio Pizzorno”.

I watched an episode, (which seemed to be a subtle variation on his MB work) and was delighted half way through to see one of his characters have a go at origami. Even better, he folded and modelled a pair of “comedy breasts”, much beloved of Paul Gascoigne and Blackadder. On closer inspection, these seemed to be the version with nips created by Uwe Hollerbach, based on a design of mine from “Adult Origami“.

This classic, long since out of print, has been somewhat of an albatross, since it (along with the viral publicity pics) placed me quite firmly in the “weird” camp for a while. In my view, it was no more than the origami version of naughty seaside postcards and overflowing with irony, plus the models were great. But of the 40 odd books I’ve written, this one seemed to create more of a fuss. My wikipedia entry even makes reference to it, as if it’s a central part of my creative oeuvre.

It’s all water under the the bridge now, but still nice to see the models (or variants) live on!