There’s a Plaice for us, somewhere… 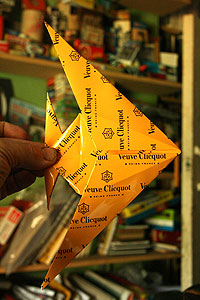 I was approached recently about a commission to produce 50 origami fish, about 12″ high, folded using paper branded with the logo of the client, Verve Clicquot. The design was by John Montroll, so I contacted him and arranged a suitable percentage for use of his work.

Then came the slight “tweaks” to the contract – the fish were to be hung from a wire outside the clients building, in Spain, and must be capable of resisting the worst that Spanish weather could throw at it, for a whole year, without fading. I was floundering somewhat and couldn’t believe what I was herring!

Good Cod, I thought, I need to mullet over, but had to get my skates on. Eventually, I found the sole offset printers her in Sheffield who could print the pattern onto UPVC “paper” and trim to a suitably sized square. This material turned out to be remarkably appropriate, water and weatherproof, with an ultra-voilet coating to prevent fading as much as was possible.

I was turbot-charged and the folding was halibut over when the physical pressure needed to add a crease to plastic soon took its toll with some pulled tendons (Pollocks!) in my wrist slowing progress down somewhat as I wrassled with it. I’d haddock enough by the end, but didn’t carp about it. 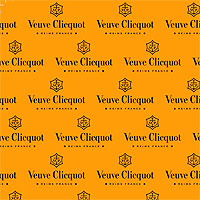 I had to mako a dozen or so models to refine my folding sequence. The creases themselves were fairly crisp, and perhaps surprisingly, could be reversed without difficulty. However, there was still a tendency to try and unfold. In the end, I layered them in a pile of 12″ albums (carefully chosen 80’s pop & classical) for a few days to carp them flat. It did help, although in the end I added a surreptitious staple.

I’d considered ironing them between layers of fabric, but in the end didn’t try it. The was  breaming smile on my face, they looked brill and I was a dab hand at it.

Oh yes, I’m still waiting to be paid – these aren’t the terms I usually goby…