It’s a moot point trying to distinguish an origami rat from an origami mouse. I’ve tried for years to create a simple design that would fall under either category. It’s a mystery why some critturs should be so easy to capture in paper whilst others require a lot more effort.

As always, you have to balance complexity with “mouseness”, but in general, a pointed tail and two ears are just about enough. I think Yoshizawa’s mouse is probably the pinnacle, with Dave Brill’s (called a mouse but is a rat to my way of thinking) and Paul Jackson’s scampering behind. 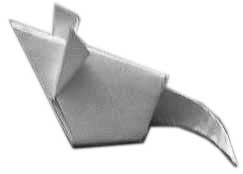 I’ve recently come up with something in the genre, I tend to see it as a rat, due to the pointed snout. It’s from a kite base and so the head will be the reverse colour, and in order to find the ears, it’s open back & (worse, to my values) an open tail. But I don’t really mind, because I think it has character, perhaps the most important aspect of a successful design (along with the folding sequence).

I’ll keep working on this as the years crawl slowly by, but for this week at least, I’ve got a rat for a friend!