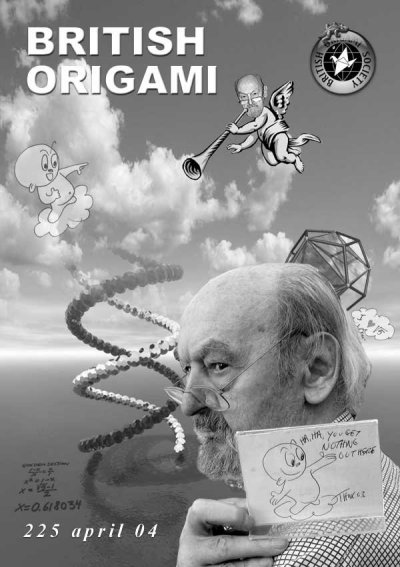 I really miss this man. He died in 2004 but I like to think his mischievous ghost still keeps an eye on the ori-world. We first met in the mid 80s, where I found a kindred spirit in his his irreverent approach to life, creative approach and love of linguistic puns. We had a regular exchange of folds and letters and it was the highlight of the week when one of his delightfully decorated envelopes dropped through the letter box.

His designs were often geometric in nature, but he often managed to give them some presentational edge which made them more appealing. His BOS booklet remains the largest printed collection of his work, but he has others scattered about (his “DNA molecule” and “Umulius Unit” are in my forthcoming classic. He was quite happy to build on existing designs and then accuse the creator of having “stolen them before he thought of them” 😉

I set up his first (and last!) website, now archived on the BOS website and I think that he would have really embraced the possibilities of the web had he lived a little longer. We met for the final time at a meeting at the Bauhaus, organised by fellow Yenn-aficionado Paulo Mulatinho. Whilst clearly suffering from a variety of age-related problems, his spirit was utterly indomitable.

During an open-air evening meal by a river, he gate-crashed a wedding party and was dancing with a delightful young woman. On the final evening, Thok took to the stage and gave a talk, always revelling in an audience, who in turn hung on his every word. John Smith has sent me a video/photo diary of the weekend, from which I’ve taken a small clip so you can see and hear Thoki, albeit briefly.

He “told it as he saw it” and managed to upset a number of people over the years, but he was unrepentant to the very end. Creativity such as he had is rarely accompanied by an introverted demeanour!

Aside from his folding and cutting skills, the talent that impressed me the most was his ability to make subtle but excellent  puns in a variety of languages and even between languages. His eyes twinkled as he tested your ability to keep up with his alert mind.

I tried to produce a suitable cover for the BOS magazine to mark his passing. Frustratingly, we couldn’t afford colour covers in those days, but I hope he would have approved of the imagery.