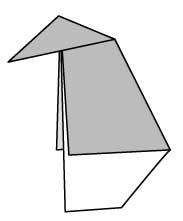 I’ve been asked to provide diagrams for a traditional penguin. The client intends to tweet text instructions, one line at a time, then release the diagram on the final tweet. I’ve not had much interaction with twitter – I signed up 18 months or so ago, found I had 4 followers on the first day and promptly cancelled my account, slightly freaked out!

Anyway, trying to condense instructions to 40 characters has proved nearly impossible – could you manage from the following?

1 Crease a diagonal then unfold it
2 Fold two sides to the diagonal, forming a kite
3 Fold the sharp corner to the centre of the paper
4 Turn over and fold the lower corner upwards
5 Fold in half along the vertical centre crease.
6 Pull out and squash the beak into place
7 Complete