Hush, hush, whisper who dares, Nicholas Robinson’s letting it slide. I had an offer of work recently for a company making an origami animals box, along the lines of (but not the same as!) the image here. 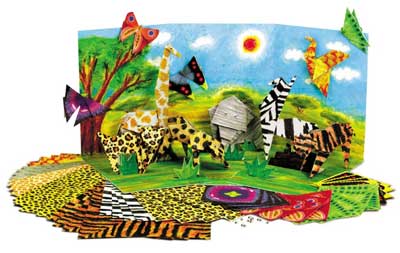 Essentially, it’s everything I hate about mass-market origami – tawdry, badly designed and doing the world of origami no favours at all. People see the pretty packaging and say “I’ll have a go at origami! They’re then faced with bad diagrams of worse models.

Most require cuts to form legs and have been bought from a Chinese company. My job, and I have chosen to accept it (work is work), is to create diagrams that can be followed by the average beginner. The models themselves are just about doable, but I have a 1 X A4 page limit per model, including text. It won’t be easy!

I’ve also decided to mask my general drawing style, so nobody will track me down afterwards! This is proving harder than you might think 😉